Will make my second attempt to conquer Mt Kinabalu in March 2009.

Mt Kinabalu (Gunung Kinabalu) is located at Kinabalu National Park, a World Heritage Site in the state of Sabah, Malaysia. At 4,095 metres, it’s the highest summit in Malaysia and the fourth highest in South East Asia. 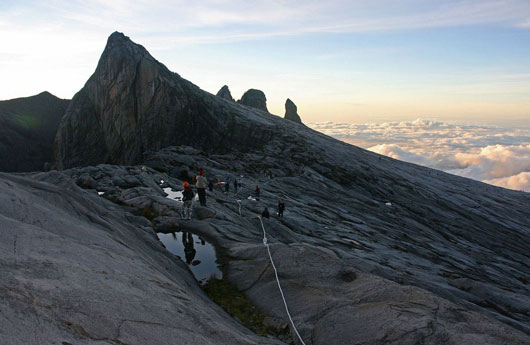 Near the summit of Mt Kinabalu… (Image by Matthew)

Mt Kinabalu is quite popular among Malaysians and foreign tourists for the fact that it doesn’t require mountaineering techniques to reach the peak; and conquering a 4000m summit does sound like a decent achievement for most people.

The hiking requires reasonable fitness though… I couldn’t make it to the top last time in March 2006; not much excuses beside the fact that I was under-prepared.

I have vowed to climb the mountain again since then, but kept on procrastinating until being invited by an old buddy a couple of months ago. If everything happens as planned… we’ll be attacking the summit in early morning of March 9, 2009.

To think that I am now 10 kg heavier then the hike in 2006… it might not be a wise idea to make the climb with just a few months of preparation lol. Well, time to start training; need to lose some weight and build up my stamina… would be a bit embarrassing if couldn’t make for the second time in a roll.

This will be the final year of my 30's. Time flies, and it seems to fade faster as one gets older. This post is a bit of recap of my adult life and some future … END_OF_DOCUMENT_TOKEN_TO_BE_REPLACED

Trailer for American film Top Gun: Maverick, a sequel to 1986's Top Gun. Beautiful is not the usual word to associate with action movies, but I cannot find a better … END_OF_DOCUMENT_TOKEN_TO_BE_REPLACED

Malaysia will be in lockdown from March 18 to March 31, 2020, to deal with the Covid-19 situation. Officially it's a Movement Control Order (MCO) but it's … END_OF_DOCUMENT_TOKEN_TO_BE_REPLACED

Korean pop idol Sulli, former member of girl group f(x), was found dead at her home on Monday. Authorities are investigating the cause of death, and it's presumed … END_OF_DOCUMENT_TOKEN_TO_BE_REPLACED

Singapore has imposed the circuit breaker measures to curb the spread of Covid-19 since early April. They announced an extension (until June 1) and some new rules a … END_OF_DOCUMENT_TOKEN_TO_BE_REPLACED

A cute photo series amidst the Covid-19 lockdown in Malaysia. Armed forces are present to assist the police to enforce the Movement Control Order (MCO) across the … END_OF_DOCUMENT_TOKEN_TO_BE_REPLACED