The New7Wonders project have shortlisted the 27 finalists of the New Seven Wonders of Nature. Below are (copied & pasted) information of the 10 finalists from Asia; you can view all the 28 finalist at N7W website…

The island’s waters host the world’s second-largest population of dugong, a large marine mammal that is threatened worldwide. Bu Tinah Island, rich in biodiversity, lies within the Marawah Marine Biosphere Reserve – the region’s largest marine reserve. Its protection and survival must be ensured.

The Dead Sea is a salt lake between Palestine and Israel to the west and Jordan to the east.

At 420 metres below sea level, its shores are the lowest point on Earth on dry land. With 30% salinity, it is 8.6 times saltier than the ocean. 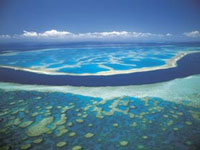 The Great Barrier Reef is the planet’s largest coral reef system, with some 3,000 individual reefs and 900 islands stretching for 2,600 km over an area of approximately 344,400 square km.

It is the biggest single structure made by living creatures and can be seen from outer space.

Halong Bay is located in Quáng Ninh province, Vietnam. The bay features thousands of limestone karsts and isles in various sizes and shapes. It has a 120km long coastline and is approximately 1,553 square kilometres in size with 1969 islets. 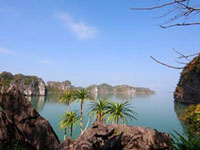 Several islands are hollow, with enormous caves, other support floating villages of fishermen, who ply the shallow waters for 200 species of fish and 450 different kinds of mollusks.

Another specific feature of Halong Bay is the abundance of lakes inside the limestone islands, for example, Dau Be island has six enclosed lakes. All these island lakes occupy drowned dolines within fengcong karst. 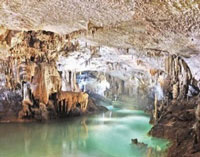 Jeita Grotto is a compound of crystallized caves in Lebanon located 20km north of Beirut in the Valley of Nahr al-Kalb. This grotto is made up of two limestone caves, upper galleries and a lower cave through which a 6230m long river runs.

Geologically, the caves provide a tunnel or escape route for the underground river. In this cave and galleries, the action of water in the limestone has created cathedral-like vaults full of various sizes, colors and shapes of stalactites and stalagmites, majestic curtains and fantastic rock formations.

The total length of the cave is more than 9000m and there is one among the biggest stalactites in the world hanging 8.20m. The grotto accommodates a huge hall with a distance of 108m from the ceiling till the water level. 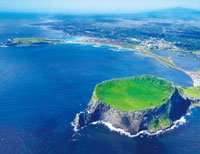 Jejudo is a volcanic island, 130 km from the southern coast of Korea. The largest island and smallest province in Korea, the island has a surface area of 1,846 square kilometres.

A central feature of Jeju is Hallasan, the tallest mountain in South Korea and a dormant volcano, which rises 1,950m above sea level. 360 satellite volcanoes are around the main volcano.

Indonesia’s Komodo National Park includes the three larger islands Komodo, Rinca and Padar, as well as numerous smaller ones, for a total area of 1,817 square kilometres (603 sqkm of it land). 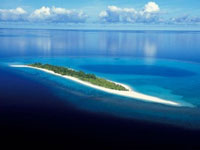 The Maldive Islands make up an island nation consisting of 26 atolls in the Indian Ocean. They are located south of India’s Lakshadweep islands, about 700km south-west of Sri Lanka. The Maldives encompass 1,192 small islands, roughly two hundred of which are inhabited.

Mud volcano or mud dome refers to formations created by geo-excreted liquids and gases, although there are several different processes which may cause such activity. 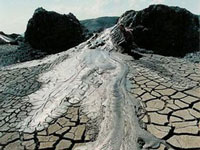 It is estimated that 300 of the planet’s estimated 700 mud domes are found in Gobustan, Azerbaijan and the Caspian Sea. In Azerbaijan, eruptions are driven from a deep mud reservoir which is connected to the surface even during dormant periods, when seeping water still shows a deep origin.

Seeps have temperatures up to 2–3°C above the ambient temperature. In 2001, one mud volcano 15km from Baku made world headlines when it suddenly started spewing flames 15m high. 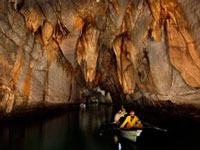 The Puerto Princesa Subterranean River National Park is located about 50km north of the city of Puerto Princesa, Palawan, Philippines. It features a limestone karst mountain landscape with an 8.2km navigable underground river.

A distinguishing feature of the river is that it winds through a cave before flowing directly into the South China Sea. It includes major formations of stalactites and stalagmites, and several large chambers.

The lower portion of the river is subject to tidal influences. The underground river is reputed to be the world’s longest. At the mouth of the cave, a clear lagoon is framed by ancient trees growing right to the water’s edge. Monkeys, large monitor lizards, and squirrels find their niche on the beach near the cave.

The Sundarbans delta, at the mouth of the Ganges river, is the largest mangrove forest in the world, spreading across parts of Bangladesh and West Bengal, India.

The Sundarbans features a complex network of tidal waterways, mudflats and small islands of salt-tolerant mangrove forests. The area is known for its wide range of fauna, with the Royal Bengal tiger being the most famous, but also including many birds, spotted deer, crocodiles and snakes.

Yushan, part of Yushan National Park, is a central mountain range in Chinese Taipei and it also the name of the highest point of the range.

It is also called Jade Mountain and its height is 3,952m above sea level. The park is known for its diverse wildlife and ecology.

The environment around Yushan itself spans from sub-tropical forests at its base to alpine conditions at its peak.

This will be the final year of my 30's. Time flies, and it seems to fade faster as one gets older. This post is a bit of recap of my adult life and some future … END_OF_DOCUMENT_TOKEN_TO_BE_REPLACED

Trailer for American film Top Gun: Maverick, a sequel to 1986's Top Gun. Beautiful is not the usual word to associate with action movies, but I cannot find a better … END_OF_DOCUMENT_TOKEN_TO_BE_REPLACED

Malaysia will be in lockdown from March 18 to March 31, 2020, to deal with the Covid-19 situation. Officially it's a Movement Control Order (MCO) but it's … END_OF_DOCUMENT_TOKEN_TO_BE_REPLACED

Korean pop idol Sulli, former member of girl group f(x), was found dead at her home on Monday. Authorities are investigating the cause of death, and it's presumed … END_OF_DOCUMENT_TOKEN_TO_BE_REPLACED

Singapore has imposed the circuit breaker measures to curb the spread of Covid-19 since early April. They announced an extension (until June 1) and some new rules a … END_OF_DOCUMENT_TOKEN_TO_BE_REPLACED

A cute photo series amidst the Covid-19 lockdown in Malaysia. Armed forces are present to assist the police to enforce the Movement Control Order (MCO) across the … END_OF_DOCUMENT_TOKEN_TO_BE_REPLACED