On Air is a Korean drama series about TV drama production… behind the scenes, the challenges, struggles, teamwork, scandals and relationships.

The drama is directed by Shin Woo-chul and written by Kim Eun-suk, the team behind popular dramas Lovers in Paris and Lovers in Prague etc. Leading the cast are Lee Beom-soo, Kim Ha-neul, Park Yong-ha and Song Yun-ah. 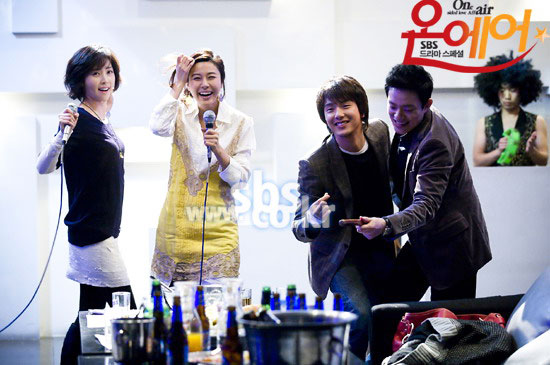 Popular actress Oh Seung-ah (Kim Ha-neul) is often criticised for her poor acting skills. Her relationship with Jin Sang-woo, her bullish talent manager, is turning sour as her contract is approaching the end… and to the surprises of many, she signed her new contract with a relatively unknown and near broke agency, managed by Jang Gi-jun (Lee Beom-soo).

Seo Young-eun (Song Yun-ah) is a popular writer who has written many top rated dramas, but is hoping for a change to write something with more depth. Her effort is not supported by her peers… rising star-director Lee Gyeong-min (Park Yong-ha) however shows strong interest to direct her earlier scripts.

The quartet shares an unusual relationship among each other, but somehow is brought together to film a drama, and is forced to work with Sang-woo who has an agenda of his own…

The drama achieved pretty nice ratings in Korea, and I like the drama too… for the fact that it’s showing something more insightful rather than the usual Korean melodrama, and it gives some basic ideas on how a drama production works.

The beginning of the drama is pretty intense, and the first 4-6 episodes were very well made. To be frank it got a bit boring in the mid-episodes, but it managed to bring back some sparks as the drama is nearing the end.

The actors have done a pretty good job. While the spotlight seems to be focusing on the performance of Kim Ha-neul, I actually think that Song Yun-ah is making a breakthrough with her witty role. The guys are outshone by the ladies IMO.

Another selling point for On Air is the cameo appearances of A-list stars, including Lee Hyori, Jeon Do-yeon, Lee Seo-jin, Kim Jung-eun and Kang Hye-jeong etc.

Overall a good show, especially for K-drama fans who are looking for something more refreshing rather than abundance of tears and romances.

This will be the final year of my 30's. Time flies, and it seems to fade faster as one gets older. This post is a bit of recap of my adult life and some future … END_OF_DOCUMENT_TOKEN_TO_BE_REPLACED

Trailer for American film Top Gun: Maverick, a sequel to 1986's Top Gun. Beautiful is not the usual word to associate with action movies, but I cannot find a better … END_OF_DOCUMENT_TOKEN_TO_BE_REPLACED

Malaysia will be in lockdown from March 18 to March 31, 2020, to deal with the Covid-19 situation. Officially it's a Movement Control Order (MCO) but it's … END_OF_DOCUMENT_TOKEN_TO_BE_REPLACED

Korean pop idol Sulli, former member of girl group f(x), was found dead at her home on Monday. Authorities are investigating the cause of death, and it's presumed … END_OF_DOCUMENT_TOKEN_TO_BE_REPLACED

Singapore has imposed the circuit breaker measures to curb the spread of Covid-19 since early April. They announced an extension (until June 1) and some new rules a … END_OF_DOCUMENT_TOKEN_TO_BE_REPLACED

A cute photo series amidst the Covid-19 lockdown in Malaysia. Armed forces are present to assist the police to enforce the Movement Control Order (MCO) across the … END_OF_DOCUMENT_TOKEN_TO_BE_REPLACED