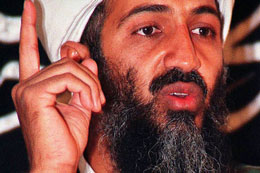 US President Barack Obama announced late Sunday night that Osama bin Laden, the mastermind behind the 9/11 attack in the US almost 10 years ago, is dead.

Osama was the long time leader of al-Qaeda which launched the terrorist attack in New York that killed nearly 3000 people.

It’s said that Osama was killed by US forces in a mansion outside the Pakistani capital of Islamabad along with other family members. More on CNN.