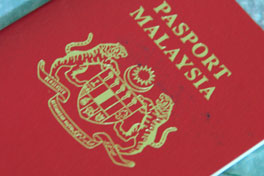 Went to Vietnam last week. A mini saga occurred when I was back at the airport at Kuala Lumpur, when I realised that my passport was not in my possession…

I wouldn’t panic under most circumstances, but a series of (chaotic) events preluded the incident… which led to an immediate thought that I had dropped the passport somewhere (instead of simply keeping it at another corner of my bags).

Still, my immediate response was to search my bags, twice, but couldn’t find it… thus the beginning of a two hour long search at the airport, in which I visited almost every administrative offices and done a few things which would get me into trouble at an American airport. Anyhow, couldn’t find it after the hunt and had to file a police report – which AFAIK was a first (losing passport) among my family and peers.

Took a cab back home after that. The adrenalin rush had settled down after reaching home, and I decided to search through my bags again… funny enough, my passport appeared somewhere in the corner, clearly visible, and it took me less than 60 seconds to discover it. How I managed to miss that at the airport remains a big mystery lol.

Stupid things happened to the brightest people sometimes, and I’m not the steadiest of all to begin with. Two hours wasted, a rather bizarre yet special experience, and a laughing material among my tour mates for a long long time.

This will be the final year of my 30's. Time flies, and it seems to fade faster as one gets older. This post is a bit of recap of my adult life and some future … END_OF_DOCUMENT_TOKEN_TO_BE_REPLACED

Trailer for American film Top Gun: Maverick, a sequel to 1986's Top Gun. Beautiful is not the usual word to associate with action movies, but I cannot find a better … END_OF_DOCUMENT_TOKEN_TO_BE_REPLACED

Malaysia will be in lockdown from March 18 to March 31, 2020, to deal with the Covid-19 situation. Officially it's a Movement Control Order (MCO) but it's … END_OF_DOCUMENT_TOKEN_TO_BE_REPLACED

Korean pop idol Sulli, former member of girl group f(x), was found dead at her home on Monday. Authorities are investigating the cause of death, and it's presumed … END_OF_DOCUMENT_TOKEN_TO_BE_REPLACED

Singapore has imposed the circuit breaker measures to curb the spread of Covid-19 since early April. They announced an extension (until June 1) and some new rules a … END_OF_DOCUMENT_TOKEN_TO_BE_REPLACED

A cute photo series amidst the Covid-19 lockdown in Malaysia. Armed forces are present to assist the police to enforce the Movement Control Order (MCO) across the … END_OF_DOCUMENT_TOKEN_TO_BE_REPLACED