Phở (pronounced like ‘fuh?’) is a traditional rice noodle soup and one of the most iconic Vietnamese foods. Pho is normally served as a bowl of flat-rice-noodles in beef broth, with some beef slices or other options like tripe or chicken etc.

There are a few variations of pho depending on the regions in Vietnam. The pho in Hanoi is called phở Hà Nội or phở bắc (northern pho), which is normally served with green onions; while the other regions are using different herbs instead. 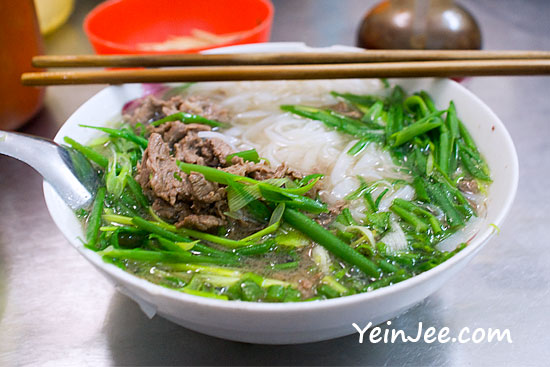 A new found friend brought me to one of the locals’ favourite to try the pho when I was in Hanoi in July 2008. The place is Pho Thin, located at 13 Lo Duc St.

The restaurant was packed on the Saturday morning. The customers were sitting shoulder to shoulder while some others lining up for their seats. It’s not difficult to understand the crowdiness after tasting the pho, because it was really good.

The rice noodles were smooth and chewy, and the broth was rich in flavour despite looking mild and clear… and their chillies were nice too. Simplicity to its best.