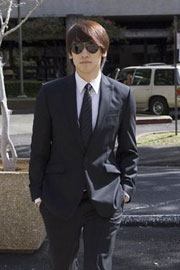 Korean pop star Rain and his former agency JYP Entertainment were ordered to pay ~USD8.1 million in damages to a Hawaiian event promoter for cancelling a concert in June 2007.

The judgement was made by a federal court on March 19th in Honolulu; both Rain and JYPE have stated their intention to appeal against the decision.

Rain’s Hawaiian concert at Aloha Stadium was cancelled a few days before the scheduled date; he is facing another lawsuit in LA for cancelling a concert just hours before the show (same tour as the Hawaii concert).

Rain’s spokesperson and JYPE’s representative have expressed their surprise with the verdict, saying that they expected themselves to win the case.

Frankly speaking, it would be very naive if they thought they could win… a concert was cancelled, and they don’t have a really good reason not to compensate, or at least share the damages with the concert promoter.

Asian fans might be shocked with the sum though; in Asian cases the compensations would normally for direct financial loses while neglecting other intangible aspects (e.g. punitive, reputation damage)… obviously it doesn’t work that way in the States.

[update] Rain and JYPE reached agreed on a settlement with Click Entertainment; the amount was not disclosed, but it’s expected to be much lower than the initial compensation [via KBS]

This will be the final year of my 30's. Time flies, and it seems to fade faster as one gets older. This post is a bit of recap of my adult life and some future … END_OF_DOCUMENT_TOKEN_TO_BE_REPLACED

Trailer for American film Top Gun: Maverick, a sequel to 1986's Top Gun. Beautiful is not the usual word to associate with action movies, but I cannot find a better … END_OF_DOCUMENT_TOKEN_TO_BE_REPLACED

Malaysia will be in lockdown from March 18 to March 31, 2020, to deal with the Covid-19 situation. Officially it's a Movement Control Order (MCO) but it's … END_OF_DOCUMENT_TOKEN_TO_BE_REPLACED

Korean pop idol Sulli, former member of girl group f(x), was found dead at her home on Monday. Authorities are investigating the cause of death, and it's presumed … END_OF_DOCUMENT_TOKEN_TO_BE_REPLACED

Singapore has imposed the circuit breaker measures to curb the spread of Covid-19 since early April. They announced an extension (until June 1) and some new rules a … END_OF_DOCUMENT_TOKEN_TO_BE_REPLACED

A cute photo series amidst the Covid-19 lockdown in Malaysia. Armed forces are present to assist the police to enforce the Movement Control Order (MCO) across the … END_OF_DOCUMENT_TOKEN_TO_BE_REPLACED