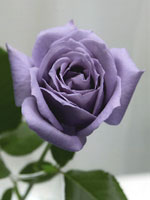 Developed by Suntory Flowers, the roses are genetically modified and implanted with a gene that simulates the synthesis of blue pigment in pansies.

The first blue rose was created in 2004, but further research was required to make them safe to grow in nature.

The Suntory rose made its public debut at the 5th International Flower Expo Tokyo (IFEX) over the weekend; and are expected to go on sale commercially next autumn.

Blue roses have been available in florists in recent years but are created by various dying techniques to stain the petals of naturally white roses. The Suntory roses are believed to be the first genetically-modified blue rose creations [more on Telegraph]