At least 16 spectators died and 10 seriously injured in a mishap at an outdoor concert in Seongnam, Korea, on October 17, 2014. The victims fell 20 metres into an underground parking area when the ventilation grates (which they were not supposed to stand on) gave way under their weight. Image by TheFact [Kr]. 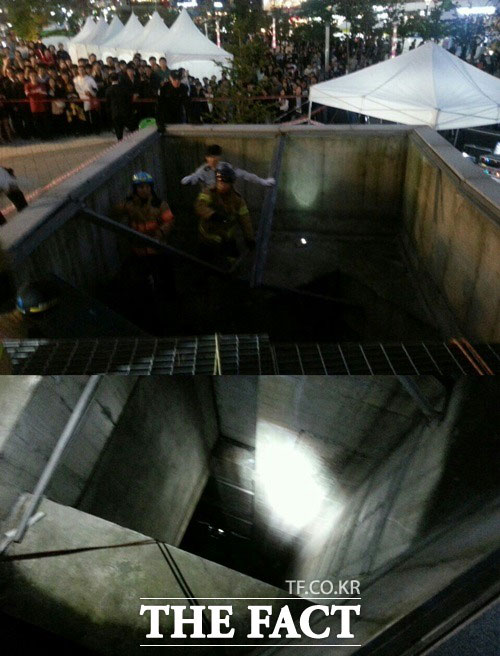 The accident happened around 5pm KST, two were confirmed dead initially, but the toll continues to rise. 20 metres is about five stories, and the bottom is most probably hard concrete; it’s a really bad scenario, hope it won’t get any worse.

The concert featured pop groups 4Minute and T-ara etc. The organisers underestimated the crowd they would attract; the seats were limited and people standing in whatever spots they could find. Unfortunately some made a fatal choice.

The country’s public safety standard is already under heavy scrutiny since the Sewol ferry disaster, it’s going to intensify after this. To be fair the vent area is waist-high, people won’t step on it by accident. It’s also reported that the security personnel had warn people not to climb on the vent but to no avail.

[Update] There are conflicting reports claiming that securities didn’t do anything.

The shaft design (20 metres straight down) is definitely flawed though, I’m not sure it’s a common thing elsewhere – I’ve seen a few in Seoul, not sure if it’s as deep – but to have a 20 metres hole in a populated public area is quite daunting; the grates need to be stronger to cover the danger.

That being said, people need to have more common sense. The vent design was bad, the concert organiser was partly blameable, but ultimately it’s the lack of awareness that caused the disaster. Many of the victims were adults, it sounds cruel to blame the death, and I’m not saying they deserved the outcome… it’s just that the tragedy could have been easily prevented, it’s just sad.

[Update] One of the staffs of the concert organiser had committed suicide after the incident. May the victims (the staff included, who was pretty much a victim too) rest in peace. Condolences to the families and relatives.

This will be the final year of my 30's. Time flies, and it seems to fade faster as one gets older. This post is a bit of recap of my adult life and some future … END_OF_DOCUMENT_TOKEN_TO_BE_REPLACED

Trailer for American film Top Gun: Maverick, a sequel to 1986's Top Gun. Beautiful is not the usual word to associate with action movies, but I cannot find a better … END_OF_DOCUMENT_TOKEN_TO_BE_REPLACED

Malaysia will be in lockdown from March 18 to March 31, 2020, to deal with the Covid-19 situation. Officially it's a Movement Control Order (MCO) but it's … END_OF_DOCUMENT_TOKEN_TO_BE_REPLACED

Korean pop idol Sulli, former member of girl group f(x), was found dead at her home on Monday. Authorities are investigating the cause of death, and it's presumed … END_OF_DOCUMENT_TOKEN_TO_BE_REPLACED

Singapore has imposed the circuit breaker measures to curb the spread of Covid-19 since early April. They announced an extension (until June 1) and some new rules a … END_OF_DOCUMENT_TOKEN_TO_BE_REPLACED

A cute photo series amidst the Covid-19 lockdown in Malaysia. Armed forces are present to assist the police to enforce the Movement Control Order (MCO) across the … END_OF_DOCUMENT_TOKEN_TO_BE_REPLACED