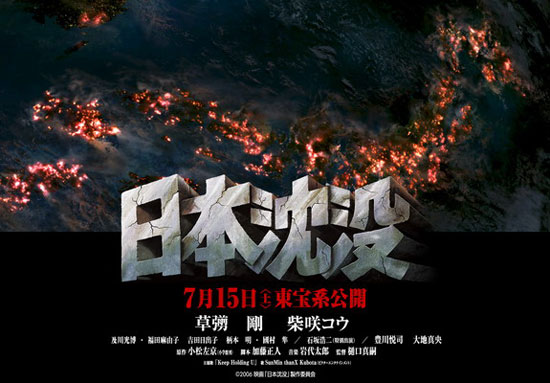 Scientists have discovered that Japan is sinking into the sea due to tectonic plate motions. And the country has less than a year to move out all its people.

Toshi (Tsuyoshi), a scientist behind the finding, bump into emergency rescue worker Reiko (Shibasaki) during the crisis, and romance blossom in between.

As the situation worsen, Toshi has a chance to leave the country as one of the selected “elites”, but Reiko decides to stay and help the victims instead.

When Toshi is pondering his options, scientists find out that Japan can still survive and Toshi is the only one who can save them from destruction…

Despite its box office success, Sinking of Japan received mixed reviews from film critics. A sarcastic award actually named it the worse movie of the year.

I think the movie is OK though. The story-line is rather weak, and the romance is boring; but the film is not that bad overall. The special effects are not Hollywood but have a distinctive Japanese flavour in it. And the actors did alright too given the limitation of the script.

The movie is also known as Doomsday: The Sinking of Japan in the United States.

This will be the final year of my 30's. Time flies, and it seems to fade faster as one gets older. This post is a bit of recap of my adult life and some future … END_OF_DOCUMENT_TOKEN_TO_BE_REPLACED

Trailer for American film Top Gun: Maverick, a sequel to 1986's Top Gun. Beautiful is not the usual word to associate with action movies, but I cannot find a better … END_OF_DOCUMENT_TOKEN_TO_BE_REPLACED

Malaysia will be in lockdown from March 18 to March 31, 2020, to deal with the Covid-19 situation. Officially it's a Movement Control Order (MCO) but it's … END_OF_DOCUMENT_TOKEN_TO_BE_REPLACED

Korean pop idol Sulli, former member of girl group f(x), was found dead at her home on Monday. Authorities are investigating the cause of death, and it's presumed … END_OF_DOCUMENT_TOKEN_TO_BE_REPLACED

Singapore has imposed the circuit breaker measures to curb the spread of Covid-19 since early April. They announced an extension (until June 1) and some new rules a … END_OF_DOCUMENT_TOKEN_TO_BE_REPLACED

A cute photo series amidst the Covid-19 lockdown in Malaysia. Armed forces are present to assist the police to enforce the Movement Control Order (MCO) across the … END_OF_DOCUMENT_TOKEN_TO_BE_REPLACED