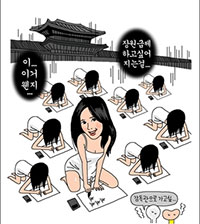 Korean entertainment agency SM Entertainment is going to take legal action against a cartoonist for his drawing which is said to have sexually harassed their pop group Girls’ Generation.

The cartoon by Yoon Seo-in shows the girls ‘taking exams’ while covered with just a cloth, and with some ambiguous messages. Sexual harassment or not, it’s up to debate; but it has caused uproar among the protective fans.

I find it ironic though, that the company is suing people for a suggestive cartoon when they themselves are busy sexing up the girls to sell more products. The MV of their previous hit, Tell Me Your Wish for example, shows the girls in ultra short pants, and in a few scenes, jumping on bed singing “Tell Me Your Wish.” There’s plenty of rooms for imagination.

Off course that doesn’t mean that the fans are entitled to respond to their fantasy in public in an indecent manner. But countering it with legal action? That’s probably a bit too much for this case in particular… it’s just a freaking cartoon.