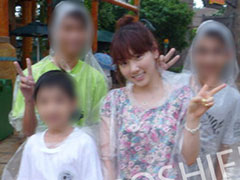 The story begun when popular Korean girl group SNSD was given a rare holiday a few days ago… and one of the members Taeyeon decided to have a vacation with her family at the sunny island of Singapore.

What she didn’t anticipate was the group’s popularity in Singapore. She might have enjoyed a day or two of relative peace, but things broke loose once the news of her where about was exposed… as some fans began a countrywide manhunt for the adorable star.

Being an island nation, it’s pretty predictable where she might be visiting, and some fans hit the jackpot when she was spotted at the Singapore Flyer.

From some online videos it seemed that the situation wasn’t out of control, but it was noisy for sure. And it’s obvious that those fans were there for Taeyeon in purpose, albeit with harmless intention.

While Taeyeon might be used to the frenzy, it’s a pity that her family were caught in the chaos. And I bet the fans would have caused some disturbance to other patrons at the tourist spot as well.

Besides, it’s one thing to ask for autographs or photos when a star is spotted by chance on the street; it’s another story when people are stalking a celebrity despite knowing that the celeb is having some private time with family and friends.

Ironically the saga could have reminded SNSD’s agency of how popular the group are in this region. With the Bangkok concert being cancelled because of social unrest… they might just give Singapore some extra thought for their next tour.

Image by Reflow@Soshified at Universal Studio; via Snsdkorean.

This will be the final year of my 30's. Time flies, and it seems to fade faster as one gets older. This post is a bit of recap of my adult life and some future … END_OF_DOCUMENT_TOKEN_TO_BE_REPLACED

Trailer for American film Top Gun: Maverick, a sequel to 1986's Top Gun. Beautiful is not the usual word to associate with action movies, but I cannot find a better … END_OF_DOCUMENT_TOKEN_TO_BE_REPLACED

Malaysia will be in lockdown from March 18 to March 31, 2020, to deal with the Covid-19 situation. Officially it's a Movement Control Order (MCO) but it's … END_OF_DOCUMENT_TOKEN_TO_BE_REPLACED

Korean pop idol Sulli, former member of girl group f(x), was found dead at her home on Monday. Authorities are investigating the cause of death, and it's presumed … END_OF_DOCUMENT_TOKEN_TO_BE_REPLACED

Singapore has imposed the circuit breaker measures to curb the spread of Covid-19 since early April. They announced an extension (until June 1) and some new rules a … END_OF_DOCUMENT_TOKEN_TO_BE_REPLACED

A cute photo series amidst the Covid-19 lockdown in Malaysia. Armed forces are present to assist the police to enforce the Movement Control Order (MCO) across the … END_OF_DOCUMENT_TOKEN_TO_BE_REPLACED