~590,000 Korean students took their College Scholastic Ability Test (CSAT, 수능 Suneung) on Thursday (Nov 13) – a day where the students had to endure a gruelling nine-hour tests that would significantly influence their future career prospect.

It’s a day where stock market and offices were opened an hour late to ease the morning traffic; where flights had to be rescheduled during the listening test to avoid the slightest disturbance; and it’s a day where temples and churches were packed with parents praying for good performances from their kids. 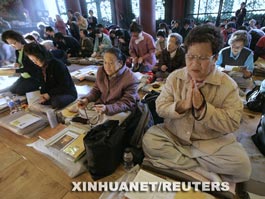 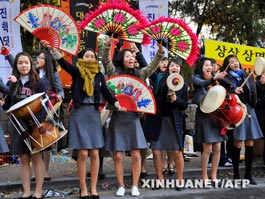 Parents praying for their kids in a Seoul temple and students cheering for their seniors
to do well in the exam. Image from Xinhuanet (Cn)

The CSAT would determine which university/college the Korean students would be enrolled to, and the reputation of the universities will make a huge impact on their career path, which is true in most nations but far more definite for Koreans.

The larger-than-life exam culture is not entirely unique to Korea. Most of the East Asian countries are adopting similar ideology, presumably originated from the Chinese civil servants’ exams in ancient Chinese dynasty thousand of years ago. The Koreans however seem to be taking the idea to its extremity.

Many quarters have criticised that the high pressure of preparing for the CSAT attributes to the high suicide rates of Korean teenagers. Some others are also criticising that the system are undermining the students’ creativity and other talents.

This will be the final year of my 30's. Time flies, and it seems to fade faster as one gets older. This post is a bit of recap of my adult life and some future … END_OF_DOCUMENT_TOKEN_TO_BE_REPLACED

Trailer for American film Top Gun: Maverick, a sequel to 1986's Top Gun. Beautiful is not the usual word to associate with action movies, but I cannot find a better … END_OF_DOCUMENT_TOKEN_TO_BE_REPLACED

Malaysia will be in lockdown from March 18 to March 31, 2020, to deal with the Covid-19 situation. Officially it's a Movement Control Order (MCO) but it's … END_OF_DOCUMENT_TOKEN_TO_BE_REPLACED

Korean pop idol Sulli, former member of girl group f(x), was found dead at her home on Monday. Authorities are investigating the cause of death, and it's presumed … END_OF_DOCUMENT_TOKEN_TO_BE_REPLACED

Singapore has imposed the circuit breaker measures to curb the spread of Covid-19 since early April. They announced an extension (until June 1) and some new rules a … END_OF_DOCUMENT_TOKEN_TO_BE_REPLACED

A cute photo series amidst the Covid-19 lockdown in Malaysia. Armed forces are present to assist the police to enforce the Movement Control Order (MCO) across the … END_OF_DOCUMENT_TOKEN_TO_BE_REPLACED