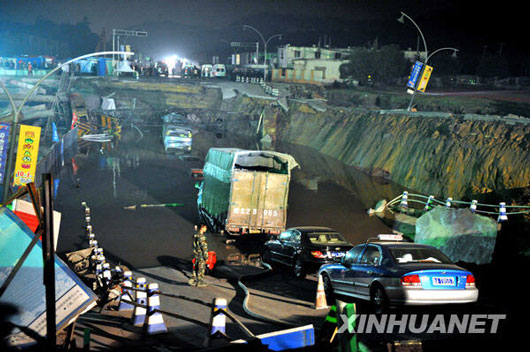 Mishaps like this is nothing new in China where hazardous working condition is still a norm despite its rapid economic growth. At the time of writing there’s another news of flooded coal mine in Henan Province that kills two… and similar news has been occurring almost every week or two despite the public uproar.

Surviving workers told the press that they discovered some problems a month ago with cracks appearing on the road surface on top of the collapsed section, but no precaution steps were taken. A nearby resident stated that the crack had appeared around three months ago instead.

Rescue effort is still running day and night… hope that some of the missing persons might still survive despite the slim possibility.

And as always, the relevant authority has vowed to find the cause and severely punish the culprits… unfortunately such seriousness in action always comes a bit too late for the deceased.