Old video showing the long queue on the opening day (Jan 31, 1990) of the first – and back then the world’s largest – McDonald’s restaurant in former Soviet Union.

The restaurant was operated by McDonald’s Canada instead of the American HQ, probably to avoid sensitivity issue as the Cold War has just ended. 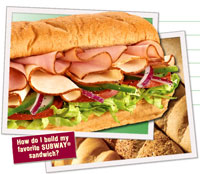 Subway has surpassed McDonald’s as the world’s largest restaurant chain in terms of units. Subway had 33,749 restaurants around the globe at the end of 2010, while McDonald’s had 32,737.

Subway is not popular in Asia though, only 1000+ of its outlets are in this region, less than 5% of its total units which are spread across 95 countries.

Its spokesperson has named India and China among its high growth nations, but it remains to be seen if they could survive in long run. Culturally Asians have yet to accept sandwich or burger as staple food.

And the idea of eating healthily – which Subway is famous for – works only in a few places in this part of the world. Pricing and taste prevail.

Hawaiian food and lifestyle, as introduced by Korean-Canadian actress Grace Park – one of the main leads in American TV series Hawaii Five-0…

Cold Stone Creamery, an ice-cream parlor franchise from Arizona, USA, is known for its mix-ins and lively service culture where the workers would sing a tune or two when tipped by the customers.

Tipping is not common in Asia though; so I guess the staff would probably sing along whenever they feel like it. Sharing some videos of the staff in action from Cold Stone Creamery outlets in Japan, Korea, China and Taiwan…

END_OF_DOCUMENT_TOKEN_TO_BE_REPLACED

This will be the final year of my 30's. Time flies, and it seems to fade faster as one gets older. This post is a bit of recap of my adult life and some future … END_OF_DOCUMENT_TOKEN_TO_BE_REPLACED

Trailer for American film Top Gun: Maverick, a sequel to 1986's Top Gun. Beautiful is not the usual word to associate with action movies, but I cannot find a better … END_OF_DOCUMENT_TOKEN_TO_BE_REPLACED

Malaysia will be in lockdown from March 18 to March 31, 2020, to deal with the Covid-19 situation. Officially it's a Movement Control Order (MCO) but it's … END_OF_DOCUMENT_TOKEN_TO_BE_REPLACED

Korean pop idol Sulli, former member of girl group f(x), was found dead at her home on Monday. Authorities are investigating the cause of death, and it's presumed … END_OF_DOCUMENT_TOKEN_TO_BE_REPLACED

Singapore has imposed the circuit breaker measures to curb the spread of Covid-19 since early April. They announced an extension (until June 1) and some new rules a … END_OF_DOCUMENT_TOKEN_TO_BE_REPLACED

A cute photo series amidst the Covid-19 lockdown in Malaysia. Armed forces are present to assist the police to enforce the Movement Control Order (MCO) across the … END_OF_DOCUMENT_TOKEN_TO_BE_REPLACED