Singapore lifted the ASEAN Football Cup (officially the AFF Suzuki Cup, named after the current sponsor) for a record fourth time after defeating Thailand 3-2 on aggregate… 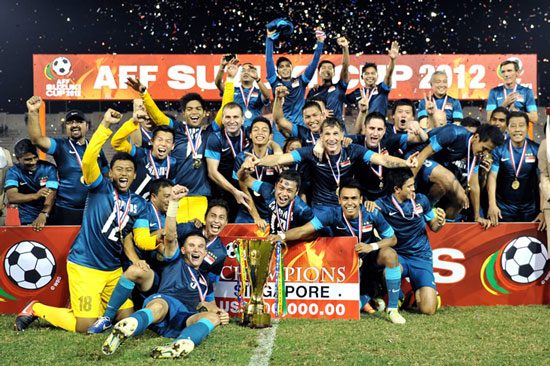 Southeast Asian football hit new low in 2011 with no representative in the AFC Asian Cup, which is a shame as football is arguably the most popular sport in this region. Hope to see at least one of the Southeast Asian teams make it to Australia (2015).

Malaysia have clinched the AFF Suzuki Cup, the biggest football tournament in Southeast Asia, for the first time since the competition was inaugurated in 1996, after defeating Indonesia over a two-legged final with a 4-2 aggregate.

Southeast Asian countries are among the weakest footballing nations – none of the teams has ever featured in the World Cup, yet there’s still strong enthusiasm for the sport. The Malaysian government are so overjoyed with the achievement that Friday is declared a special public holiday (which I think is a bit too much).

The games were not without dramas; both nations are in a love-hate relationship for decades, and the Indonesian supporters were not happy with the gimmicks of Malaysian fans at the first leg match in Kuala Lumpur. Armoured trucks and some 10,000 policemen were deployed to ensure the safety at the second leg at Gelora Bung Karno Stadium in Jakarta. Thankfully there’s no need for them to be called into full action.

This will be the final year of my 30's. Time flies, and it seems to fade faster as one gets older. This post is a bit of recap of my adult life and some future … END_OF_DOCUMENT_TOKEN_TO_BE_REPLACED

Trailer for American film Top Gun: Maverick, a sequel to 1986's Top Gun. Beautiful is not the usual word to associate with action movies, but I cannot find a better … END_OF_DOCUMENT_TOKEN_TO_BE_REPLACED

Malaysia will be in lockdown from March 18 to March 31, 2020, to deal with the Covid-19 situation. Officially it's a Movement Control Order (MCO) but it's … END_OF_DOCUMENT_TOKEN_TO_BE_REPLACED

Korean pop idol Sulli, former member of girl group f(x), was found dead at her home on Monday. Authorities are investigating the cause of death, and it's presumed … END_OF_DOCUMENT_TOKEN_TO_BE_REPLACED

Singapore has imposed the circuit breaker measures to curb the spread of Covid-19 since early April. They announced an extension (until June 1) and some new rules a … END_OF_DOCUMENT_TOKEN_TO_BE_REPLACED

A cute photo series amidst the Covid-19 lockdown in Malaysia. Armed forces are present to assist the police to enforce the Movement Control Order (MCO) across the … END_OF_DOCUMENT_TOKEN_TO_BE_REPLACED