Korea Tourism Organisation is running series of online contests via its Korea 100 Sparkles campaign, with USD30,000 prizes to give away and opportunities to meet some of the top Korean celebrities.

The big prizes require some creativity and hard work. Sharing the easier one first… watch the video below, The 5 Most Popular Tourist Destinations in Korea, and leave a comment on Youtube telling which place is your favourite and why.

Main prize is two round trip airline tickets to South Korea; contest ends on November 10, 2009. Check out the video even if you are not interested with the opportunity; pretty neat tourism stuff…

Another contest that offer chances to meet some famous Korean stars requires a bit of creativity and video making skills. Quoted directly…

Capture the sparkling spirit of Korea with your camera and win the chance to meet a major Hallyu star.

When entering this photo and video contest, you will also be asked to select the Korean star that you would most like to meet. Then, if you win this contest, you will be meeting the star you chose face to face!

[Update] The official event website was closed after the end of the competition.

Taiwan tourism bureau is trying to emulate the buzz of the Best Job in The World with their very own Best Trip in The World contest.

The participating teams (of at least two) will have to create a money-saving, yet creative four-day itinerary for a trip in Taiwan.

50 teams that come up with the best itineraries will be selected to execute their travel plan and share their stories with approx. $850 USD allowance provided. The teams will then stand the chance to win the $30,000 USD grand prize.

The idea is pretty much the same as their 2008 campaign, albeit a bit different with the prize money distribution; and off course, a new BEST blah blah theme.

Expiry date on June 30, contest opened to all nationalities if not mistaken; check its official website for details.

The National Youth Commission of Taiwan is organising a contest to promote youth tourism in the island, in which the winners will get a travel allowance of USD1,000 and free air tickets to Taiwan.

The contest is opened to young people (aged 18-30) with the nationality of Japan, Korea, Hong Kong, Macau, Singapore or Malaysia. 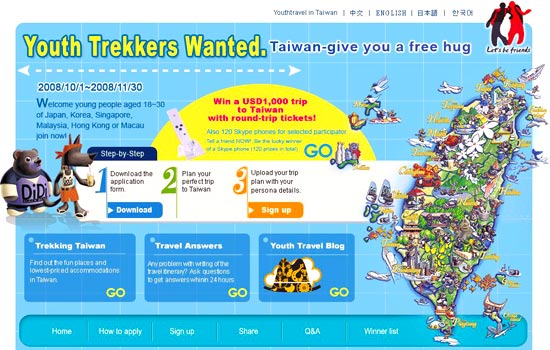 Participants are required to draft a thematic travel plan lasting for over 10 days to interact with the society, culture and environment of Taiwan.

12 winners (two from each country/place) will be awarded the travel allowance of USD1,000 and free return air tickets. There are however a few clauses that the winners have to oblige with… kindly check the contest website for more details.

Hallyuwood.com is running a contest in celebration of Chuseok holiday. The prize… a Korean pop star Lee Hyori’s style-book (five to be won). 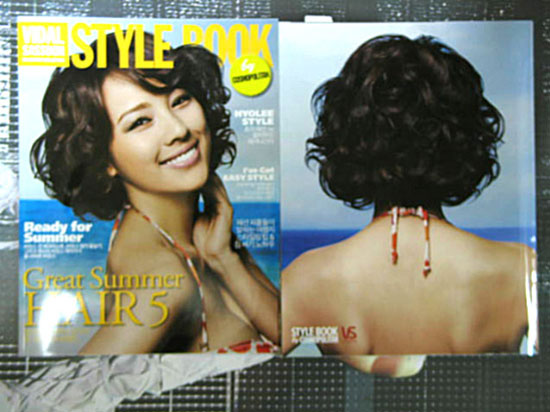 Not sure how nice the book is, but it’s something that is not easy to grab hold of if you are not from Korea. It’s a chance not to be missed for Hyori and K-pop fans. Just head over, follow the instructions and stand a chance to win the prize.

[Update] The contest is over, and the contest site is no longer active.

This will be the final year of my 30's. Time flies, and it seems to fade faster as one gets older. This post is a bit of recap of my adult life and some future … END_OF_DOCUMENT_TOKEN_TO_BE_REPLACED

Been planning for a while to make Japan my next big trip destination. Seems like its not happening soon because of other commitments. And I want to avoid the … END_OF_DOCUMENT_TOKEN_TO_BE_REPLACED

Scanned picture of a 1998 cover of the Victoria's Secret swimwear catalogue. The models are Stephanie Seymour, Daniela Peštová and Tyra Banks - the first generation … END_OF_DOCUMENT_TOKEN_TO_BE_REPLACED

Trailer for American film Top Gun: Maverick, a sequel to 1986's Top Gun. Beautiful is not the usual word to associate with action movies, but I cannot find a better … END_OF_DOCUMENT_TOKEN_TO_BE_REPLACED

Singapore has imposed the circuit breaker measures to curb the spread of Covid-19 since early April. They announced an extension (until June 1) and some new rules a … END_OF_DOCUMENT_TOKEN_TO_BE_REPLACED

A cute photo series amidst the Covid-19 lockdown in Malaysia. Armed forces are present to assist the police to enforce the Movement Control Order (MCO) across the … END_OF_DOCUMENT_TOKEN_TO_BE_REPLACED

Malaysia will be in lockdown from March 18 to March 31, 2020, to deal with the Covid-19 situation. Officially it's a Movement Control Order (MCO) but it's … END_OF_DOCUMENT_TOKEN_TO_BE_REPLACED

Korean pop idol Sulli, former member of girl group f(x), was found dead at her home on Monday. Authorities are investigating the cause of death, and it's presumed … END_OF_DOCUMENT_TOKEN_TO_BE_REPLACED