Singapore tops the ease of doing business chart for the ninth consecutive year. The ranking is featured in the Doing Business report, published annually by the World Bank Group which measures regulations that enhance business activity and those that constrain it.

A short historical film of the United Arab Emirates by Journeyman Pictures, which covers the economic development of the Middle East nation since the 1950s – from pearling, oil discovery, to trading, tourism, properties and luxuries etc…

One thing that I’ve learnt from my Hong Kong trip… apparently Hong Kong Dollar banknotes are issued by three different commercial banks, each with their own design, but with similar size and colour scheme for the same value note. 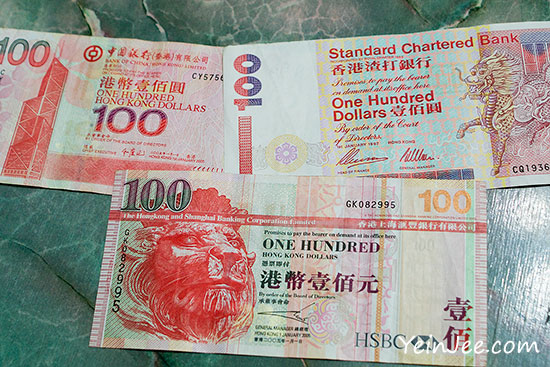 The three commercial banks are the Bank of China, the Hong Kong and Shanghai Bank, and the Standard Chartered Bank – all under the governance of the Hong Kong Monetary Authority (HKMA) which also issues banknotes itself.

Banknotes are issued solely by the central bank in most nations – some with the coins handled by another agency. Hong Kong’s system is presumably adapted from UK, with the Pound Sterling being issued by seven banks beside the Bank of England.

There are 421 million who people who are living in poverty in eight north India states of Bihar, Chattisgarh, Jharkand, Madhya Pradesh, Orissa, Rajasthan, Uttar Pradesh and West Bengal according to recent Oxford’s Multidimensional Poverty Index (MPI) – more than in the poorest 26 African countries combined (421M).

It doesn’t mean that India is poorer than those African nations (with many of them living in ‘extreme’ poverty) – the MPI is a bit complicated to begin with – but it does reflect the sad fact behind the world’s second most populated country.

I remember watching a heart-wrenching Chinese documentary, where some villagers from rural China are all-smile after selling their produce for RMB4000 (~USD590), the annual income for the entire village of about 100 households. Still, it’s not disastrous for a farming community where most basic needs are self sustainable, I can only imagine things being worse in some other places.

END_OF_DOCUMENT_TOKEN_TO_BE_REPLACED

Will be travelling to Bromo-Tengger-Semeru National Park – famous for its volcanoes – in Indonesia next week. Still a few days to go, but I have a few personal matters to settle before the trip, thus the blog will not be updated until I’m back next weekend.

So, what’s the millionaire’s trip about? Apparently Indonesian Rupiah is one of the least valued currency units; got myself 1.9 million Rupiahs (~US$200) the other day, which literally makes me a millionaire just like many others lol.

In case you are wondering, the world’s least valued currency is the Vietnamese đồng, which took over the #1 spot in April 2009 from the suspended Zimbabwean dollar, which had a 100 trillion dollar banknote (~US$33) at some point.

[Update] Check out photos and updates of my Bromo trip.

Tokyo has knocked Moscow off the top spot as the world’s most expensive city for expatriates, according to the latest Cost of Living Survey by human resource consulting firm Mercer. The later topped the list for the previous three editions.

Currency fluctuation is the major factor for the ups and downs – London, Seoul, and Sydney etc. are dropped significantly because of weakened currency.

This will be the final year of my 30's. Time flies, and it seems to fade faster as one gets older. This post is a bit of recap of my adult life and some future … END_OF_DOCUMENT_TOKEN_TO_BE_REPLACED

Trailer for American film Top Gun: Maverick, a sequel to 1986's Top Gun. Beautiful is not the usual word to associate with action movies, but I cannot find a better … END_OF_DOCUMENT_TOKEN_TO_BE_REPLACED

Malaysia will be in lockdown from March 18 to March 31, 2020, to deal with the Covid-19 situation. Officially it's a Movement Control Order (MCO) but it's … END_OF_DOCUMENT_TOKEN_TO_BE_REPLACED

Korean pop idol Sulli, former member of girl group f(x), was found dead at her home on Monday. Authorities are investigating the cause of death, and it's presumed … END_OF_DOCUMENT_TOKEN_TO_BE_REPLACED

Singapore has imposed the circuit breaker measures to curb the spread of Covid-19 since early April. They announced an extension (until June 1) and some new rules a … END_OF_DOCUMENT_TOKEN_TO_BE_REPLACED

A cute photo series amidst the Covid-19 lockdown in Malaysia. Armed forces are present to assist the police to enforce the Movement Control Order (MCO) across the … END_OF_DOCUMENT_TOKEN_TO_BE_REPLACED