A few music videos featuring Korean pop star Lee Hyori which were used as commercial films for Anycall, a mobile phone brand established by Samsung. Hyori was the spokesperson for Anycall in 2003-2007. This commercial series actually re-sparked my passion for K-pop music after a few years of disinterest.

AnyMotion is the first of three instalments produced for Anycall, and it features Eric from pop group Shinhwa. The video was a bit controversial for a few reasons (copycats and racism etc), but quite cool nonetheless…

END_OF_DOCUMENT_TOKEN_TO_BE_REPLACED

Korean star Eric Mun becomes the first member of pop group Shinhwa to serve his mandatory military service. Over 300 supporters, including some oversea fans, bid farewell to the 29-year-old star before he was enlisted last Thursday (Oct 9) into Nonsan military training centre. Image by Newsen. 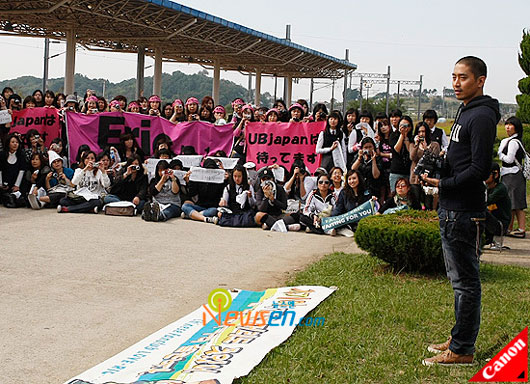 South Korean guys whose parents are both Koreans are required to join the army for 22-26 months (depending on enlisted units). If not mistaken they can choose to fulfil their duty in between the age of 20-30; most of the Korean stars are enlisted rather late though, as their careers are normally booming in early 20’s.

Four other members of Shinhwa, i.e. Dongwan, Junjin, Minwoo and Andy will be joining the army in the next two years, which literally means that Shinhwa could be in hiatus for up to four years. Hyesung is the only member exempted from military service due to medical condition.

Latest music video from Korean pop group Shinhwa, “Run”… featured in Shinhwa’s Vol.9 album which also commemorates their 10th anniversary. With the members due to enlist in military service soon, this album is selling like hot cakes at the moment.

I like the piano-play at the beginning, but overall the song is just ok for me. Funny video though…

This will be the final year of my 30's. Time flies, and it seems to fade faster as one gets older. This post is a bit of recap of my adult life and some future … END_OF_DOCUMENT_TOKEN_TO_BE_REPLACED

Trailer for American film Top Gun: Maverick, a sequel to 1986's Top Gun. Beautiful is not the usual word to associate with action movies, but I cannot find a better … END_OF_DOCUMENT_TOKEN_TO_BE_REPLACED

Malaysia will be in lockdown from March 18 to March 31, 2020, to deal with the Covid-19 situation. Officially it's a Movement Control Order (MCO) but it's … END_OF_DOCUMENT_TOKEN_TO_BE_REPLACED

Korean pop idol Sulli, former member of girl group f(x), was found dead at her home on Monday. Authorities are investigating the cause of death, and it's presumed … END_OF_DOCUMENT_TOKEN_TO_BE_REPLACED

Singapore has imposed the circuit breaker measures to curb the spread of Covid-19 since early April. They announced an extension (until June 1) and some new rules a … END_OF_DOCUMENT_TOKEN_TO_BE_REPLACED

A cute photo series amidst the Covid-19 lockdown in Malaysia. Armed forces are present to assist the police to enforce the Movement Control Order (MCO) across the … END_OF_DOCUMENT_TOKEN_TO_BE_REPLACED