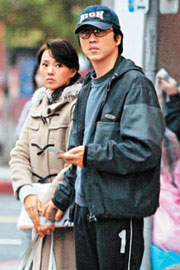 Taiwanese celebrity couple Harlem Yu and Annie Yi have ended their nine-years marriage after months of speculations. The ex-couple issued separate statement on March 20th to announce their divorce.

It’s a pity to see them splitting; they had been one of Taiwan’s most celebrated celebrity couple… in relationship for more than a decade before walking the aisle on Valentine’s Day in 2000.

Their marriage was in jeopardy in late 2008 when Annie was spotted holding hands with another guy in Beijing. It seemed like the couple was trying to rescue the marriage after that, but obviously fruitless in the end.

Most of the public voices are sympathising Harlem; but I think the public is being too harsh on Annie, as there were hints that their relationship was already heading to the wrong direction since two-three years ago…

Annie has been spending most of her time in China for the past few years building her career while Harlem focusing on his in Taiwan; obviously there’s already something wrong with the marriage then… and it’s a matter of time before something finally triggered the end of the relationship.

The divorce are done rather peacefully though; there’s not much financial conflicts as they are both financially independent, and their six-year-old kid will be under Harlem’s custody with Annie granted (probably limitless) visiting rights.

Well, best wishes to both of them… hope that they will find happiness after the split.

This will be the final year of my 30's. Time flies, and it seems to fade faster as one gets older. This post is a bit of recap of my adult life and some future … END_OF_DOCUMENT_TOKEN_TO_BE_REPLACED

Trailer for American film Top Gun: Maverick, a sequel to 1986's Top Gun. Beautiful is not the usual word to associate with action movies, but I cannot find a better … END_OF_DOCUMENT_TOKEN_TO_BE_REPLACED

Malaysia will be in lockdown from March 18 to March 31, 2020, to deal with the Covid-19 situation. Officially it's a Movement Control Order (MCO) but it's … END_OF_DOCUMENT_TOKEN_TO_BE_REPLACED

Korean pop idol Sulli, former member of girl group f(x), was found dead at her home on Monday. Authorities are investigating the cause of death, and it's presumed … END_OF_DOCUMENT_TOKEN_TO_BE_REPLACED

Singapore has imposed the circuit breaker measures to curb the spread of Covid-19 since early April. They announced an extension (until June 1) and some new rules a … END_OF_DOCUMENT_TOKEN_TO_BE_REPLACED

A cute photo series amidst the Covid-19 lockdown in Malaysia. Armed forces are present to assist the police to enforce the Movement Control Order (MCO) across the … END_OF_DOCUMENT_TOKEN_TO_BE_REPLACED