Kobe Luminarie is an annual light festival in Kobe, Japan, held every December to commemorate the earthquake in 1995. Video from the 2010 opening event…

The light installation is a Japanese-Italian collaboration, thus resembling European architecture style. The luminarie has became a huge tourist attraction in recent years, with some 129,000 people visited the festival on its opening day.

After the highly popular life-size 18-metre Gundam model in Tokyo, another giant Japanese robot statue, the Tetsujin 28-go (lit. Iron Man #28), is set to welcome its visitors in Kobe following its completion earlier this week. 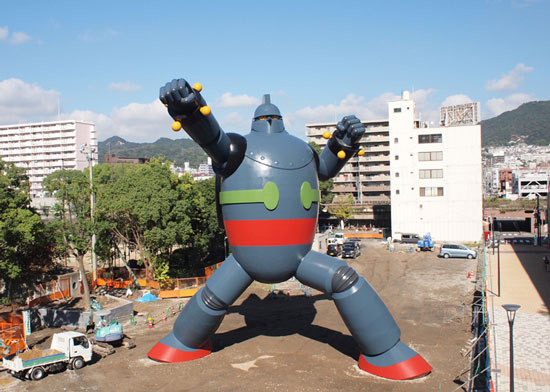 Tetsujin 28 was created in 1956 by Kobe-born Mitsuteru Yokoyama; it was one of the earliest giant robot characters in Japanese manga. The comic was later adapted into anime series and was aired in US as well, retitled as the Gigantor.

The Tetsujin 28 statue is located at Kobe’s Wakamatsu Park. It’s similar in height with the Gundam statue, but doesn’t have moving parts like the Tokyo counterpart. The Kobe robot is built as a permanent structure though, whereas the Gundam was disassembled after two months of exhibition.

If the trend keeps going, we might be seeing dozens of giant robot models across Japan in future… pretty fitting tourist attraction for the #1 robotic nation lol.

Video of paper clips “dancing” under the influence of electromagnetic field on the floor of a train in Kobe, Japan. The effect is produced by the electric current that drives the motors located under the floor.

Presumably harmless to human body, the magnetic field could damage electronic devices left on the floor. The train company is installing extra shielding on these trains as countermeasures for the issue.

This will be the final year of my 30's. Time flies, and it seems to fade faster as one gets older. This post is a bit of recap of my adult life and some future … END_OF_DOCUMENT_TOKEN_TO_BE_REPLACED

Trailer for American film Top Gun: Maverick, a sequel to 1986's Top Gun. Beautiful is not the usual word to associate with action movies, but I cannot find a better … END_OF_DOCUMENT_TOKEN_TO_BE_REPLACED

Malaysia will be in lockdown from March 18 to March 31, 2020, to deal with the Covid-19 situation. Officially it's a Movement Control Order (MCO) but it's … END_OF_DOCUMENT_TOKEN_TO_BE_REPLACED

Korean pop idol Sulli, former member of girl group f(x), was found dead at her home on Monday. Authorities are investigating the cause of death, and it's presumed … END_OF_DOCUMENT_TOKEN_TO_BE_REPLACED

Singapore has imposed the circuit breaker measures to curb the spread of Covid-19 since early April. They announced an extension (until June 1) and some new rules a … END_OF_DOCUMENT_TOKEN_TO_BE_REPLACED

A cute photo series amidst the Covid-19 lockdown in Malaysia. Armed forces are present to assist the police to enforce the Movement Control Order (MCO) across the … END_OF_DOCUMENT_TOKEN_TO_BE_REPLACED