The drama is about a group of art school students who overcome personal obstacles to achieve their dream of becoming singers and dancers. Its first episode aired earlier this month; the rating is average but it’s picking up momentum among young viewers. 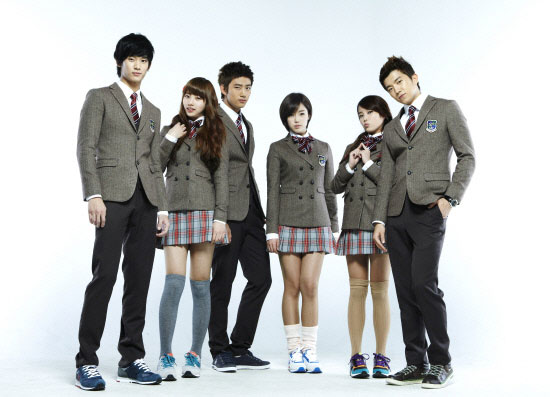 END_OF_DOCUMENT_TOKEN_TO_BE_REPLACED

Trailer for Korean drama series Legend of the Patriots, a remake of a 1970’s drama to commemorate the 60th anniversary of the Korean War.

The drama tries to show the “reality” of a war from the soldiers’ perspective, that it’s often a matter of survival instead of idealism. The Korean title, Comrades, reflects that well; the English title sounds a bit too cheesy if that’s the plot.

Korean broadcaster KBS has uploaded some performances from Music Bank (May 7, 2010 episode) on its official global Youtube channel. A chance for some folks to have a peek at the weekly show which features some of the hottest K-pop artists. Included in this post are 2PM, Rain, Lee Hyori, Secret and After School.

END_OF_DOCUMENT_TOKEN_TO_BE_REPLACED

English subbed trailer for Iris, one of the most anticipated Korean drama series of the year. The drama is said to be based on 1998 blockbuster film Swiri (or Shiri), but I think it only resembles the North-vs-South-Korea spy-action setting.

Regardless, the teaser is cool, and the drama shows plenty of promises with a strong cast of Lee Byung-hun, Kim Tae-hee, Jung Jun-ho, Kim Seung-woo, Kim So-yeon and Big Bang’s T.O.P etc. Coming soon on KBS in October 2009.

Felt sorry for Kim Tae-hee (beautiful lady with long hair) though; she’s trying so hard to prove herself as a good actress and not just a beautiful star; but yet again her role seems pretty flat and predictable.

On contrary co-actress Kim So-yeon left a stronger impression with her character… could be interesting if the actresses are taking opposite roles instead.

This will be the final year of my 30's. Time flies, and it seems to fade faster as one gets older. This post is a bit of recap of my adult life and some future … END_OF_DOCUMENT_TOKEN_TO_BE_REPLACED

Trailer for American film Top Gun: Maverick, a sequel to 1986's Top Gun. Beautiful is not the usual word to associate with action movies, but I cannot find a better … END_OF_DOCUMENT_TOKEN_TO_BE_REPLACED

Malaysia will be in lockdown from March 18 to March 31, 2020, to deal with the Covid-19 situation. Officially it's a Movement Control Order (MCO) but it's … END_OF_DOCUMENT_TOKEN_TO_BE_REPLACED

Korean pop idol Sulli, former member of girl group f(x), was found dead at her home on Monday. Authorities are investigating the cause of death, and it's presumed … END_OF_DOCUMENT_TOKEN_TO_BE_REPLACED

Singapore has imposed the circuit breaker measures to curb the spread of Covid-19 since early April. They announced an extension (until June 1) and some new rules a … END_OF_DOCUMENT_TOKEN_TO_BE_REPLACED

A cute photo series amidst the Covid-19 lockdown in Malaysia. Armed forces are present to assist the police to enforce the Movement Control Order (MCO) across the … END_OF_DOCUMENT_TOKEN_TO_BE_REPLACED