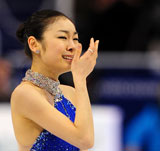 Kim scored 150.06 points in the free program on Thursday night (local time) and a new world record total of 228.56 points to earn South Korea its first ever Olympic gold medal in figure skating.

Japan’s Mao Asada and Canada’s Joannie Rochette retained their position from the short program to win the silver and bronze.

The term Grand Slam is not often used in figure skating, but it’s worth mentioning that Kim is the first ever lady to hold the title of 4CC, World Championships, Grand Prix Final and Winter Olympics at the same time.

Time to claim my free beer from the Korean guys lol. Image from Chosun [Kr]

The debate started on March 14 following an SBS interview with Kim Yuna which hinted that she was obstructed by Japanese skaters during 4CC.

To be frank the interview was ambiguous. Kim didn’t implicate anything directly, and it was SBS the Korean TV station that linked the Japanese skaters with the accusation.

But damage has already been done; Japanese media has picked up on the news and retaliated, followed by battle of words between netizens from both nations.

Kim and Japan’s Mao Asada are hot favourites to win the gold at Vancouver 2010 Winter Olympics; the duo are set to compete for the 2009 ISU World Figure Skating Championships in Los Angeles next week.

This will be the final year of my 30's. Time flies, and it seems to fade faster as one gets older. This post is a bit of recap of my adult life and some future … END_OF_DOCUMENT_TOKEN_TO_BE_REPLACED

Trailer for American film Top Gun: Maverick, a sequel to 1986's Top Gun. Beautiful is not the usual word to associate with action movies, but I cannot find a better … END_OF_DOCUMENT_TOKEN_TO_BE_REPLACED

Malaysia will be in lockdown from March 18 to March 31, 2020, to deal with the Covid-19 situation. Officially it's a Movement Control Order (MCO) but it's … END_OF_DOCUMENT_TOKEN_TO_BE_REPLACED

Korean pop idol Sulli, former member of girl group f(x), was found dead at her home on Monday. Authorities are investigating the cause of death, and it's presumed … END_OF_DOCUMENT_TOKEN_TO_BE_REPLACED

Singapore has imposed the circuit breaker measures to curb the spread of Covid-19 since early April. They announced an extension (until June 1) and some new rules a … END_OF_DOCUMENT_TOKEN_TO_BE_REPLACED

A cute photo series amidst the Covid-19 lockdown in Malaysia. Armed forces are present to assist the police to enforce the Movement Control Order (MCO) across the … END_OF_DOCUMENT_TOKEN_TO_BE_REPLACED