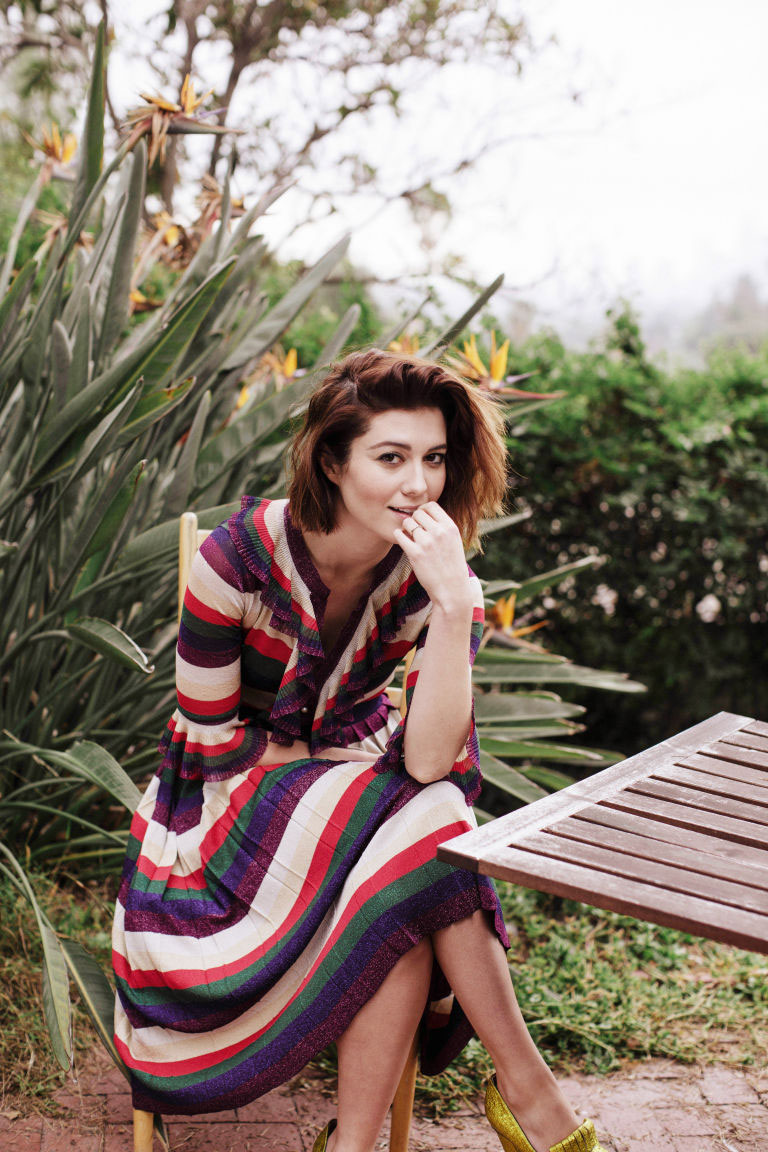 Photo by Chantal Anderson, dress by Gucci, style by Laurel Pantin, hair by Ryan Richman, and makeup by Roz Music.

Winstead will star in the anticipated 10 Cloverfield Lane later this year. The movie is the second instalment of the Cloverfield franchise but not a direct sequel of the 2008 blockbuster. The original is a monster film but the new one will be a psychological thriller instead.

Trailer for 10 Cloverfield Lane, an American psychological thriller film. Directed by Dan Trachtenberg, and stars John Goodman, Mary Elizabeth Winstead and John Gallagher Jr. It’s a spiritual sequel to the 2008 monster movie Cloverfield. In theatres in March in America, and April in Malaysia.

The film was developed from a spec script titled The Cellar. The story follows a woman who, after a car crash, wakes up in a doomsday bunker with two men who insist that a catastrophic event (from the first movie, although not originally so in the script) has left the earth surface uninhabitable.

Seems like a decent thriller film, as the woman ponders between trusting the men or escaping instead. The plot could work as a standalone movie, but the Cloverfield producers decide to pair this up with the franchise, and it could create some huge spoilers for the new movie. People who’ve watched the first instalment know what has happened, and it might take away the surprise element.

I’ve not watched the original film because of motion sickness (with found footage stuff) but I know what it’s about. I actually think that it’s a clever way to make a sequel – with seemingly unrelated story which somehow connects to the main event. The potential is limitless, they can make this into a huge franchise. The challenge though, is to keep the suspense and not making this into a spoiler fest.

It’s a decent movie, could have been better if it’s a standalone production instead. As suspected, the Cloverfield linkup took away the suspense especially in the second half of the film. The ending is anticlimactic too, feels like they insert the last 10-15 minutes just to make it relevant to the franchise. The final parts are unnecessary, and the execution is poor regardless.

The storytelling is good in the first half though; it’s pretty intense when there’s still element of surprise early on. The cast did well too, and John Goodman is simply amazing. Overall it’s still a good movie despite some flaws. Again, could have been better if it’s a standalone film, but I guess it won’t perform as well in the box office if that’s the case. And money speaks loudest in Hollywood.

Update 2018 – Check out the trailer and my review for the new instalment, The Cloverfield Paradox.

Was digging some information about Michael Angarano – who’s going to star in Chinese American movie The Forbidden Kingdom alongside Jackie Chan and Jet Li – when I found this video. It’s a trailer for Sky High, a 2005 superhero comedy film about a school for teenagers with special power…

Angarano played Will Stronghold, son of two superhero parents in the world where superheroes are part of everyday life. He’s also a student in a high school that exclusively teaches teenagers with superpowers. The rests are coming of age stuff, teen romance and save the parents plot.

I’ve seen the movie on TV, thought it was decent; couldn’t immediately connect the kid from then to now though. The film also starred Kurt Russell and Kelly Preston as the parents, with Danielle Panabaker and Mary Elizabeth Winstead as his schoolmates and love interests.

Speaking of The Forbidden Kingdom, the filming has started earlier this month in Mongolia. It’s the first ever production to feature both Jackie Chan and Jet Li, two of the biggest Asian action movie stars. Angarano will play a significant role in the film. The co-stars include Collin Chou, Liu Yifei and Li Bingbing.

Trailer for American action thriller Live Free or Die Hard, the fourth instalment in the Die Hard film series. Directed by Len Wiseman, with Bruce Willis reprising his famous role as Detective John McClane, who this time fights against cyber terrorists who hacked into major networks and crippled the country.

Justin Long plays a hacker who helps McClane, and Timothy Olyphant as the leader of the terrorist group. The cast also includes Cliff Curtis, Maggie Q and Mary Elizabeth Winstead. In cinemas next month.

I’m a fan of the film series but not sure about this one. The previous instalment was back in 1995, doubt it’s a good idea to make a new movie after a decade. Will give this a go regardless for nostalgia sake; guess the producers calculated this, banking on the old fans to support the box office.

Update – My two cents after watching this, which is titled Die Head 4.0 outside of North America. It’s an entertaining movie packed with over the top actions, Die Hard fans will like this. I’m a bit disappointed with the villains’ agenda; the final goal doesn’t make sense because with their abilities they can achieve that easily via more direct methods. Nothing much to nitpick otherwise, it’s a decent action film.

This will be the final year of my 30's. Time flies, and it seems to fade faster as one gets older. This post is a bit of recap of my adult life and some future … END_OF_DOCUMENT_TOKEN_TO_BE_REPLACED

Trailer for American film Top Gun: Maverick, a sequel to 1986's Top Gun. Beautiful is not the usual word to associate with action movies, but I cannot find a better … END_OF_DOCUMENT_TOKEN_TO_BE_REPLACED

Malaysia will be in lockdown from March 18 to March 31, 2020, to deal with the Covid-19 situation. Officially it's a Movement Control Order (MCO) but it's … END_OF_DOCUMENT_TOKEN_TO_BE_REPLACED

Korean pop idol Sulli, former member of girl group f(x), was found dead at her home on Monday. Authorities are investigating the cause of death, and it's presumed … END_OF_DOCUMENT_TOKEN_TO_BE_REPLACED

Singapore has imposed the circuit breaker measures to curb the spread of Covid-19 since early April. They announced an extension (until June 1) and some new rules a … END_OF_DOCUMENT_TOKEN_TO_BE_REPLACED

A cute photo series amidst the Covid-19 lockdown in Malaysia. Armed forces are present to assist the police to enforce the Movement Control Order (MCO) across the … END_OF_DOCUMENT_TOKEN_TO_BE_REPLACED