Ninjas were historically spies or mercenaries in feudal Japan who were skilled in espionage, deception and surprise attacks. They featured often in pop culture these days.

Trailers for Hollywood movie The Wolverine, the latest of the X-Men franchise. Hugh Jackman reprises his role as Logan aka Wolverine, who travels to Japan and battle ninjas and samurai while having his healing ability suppressed by enemies. Other co-stars include … END_OF_DOCUMENT_TOKEN_TO_BE_REPLACED

Trailers for Ninja Assassin, starring Korean pop star Rain, his first leading role in a Hollywood film. Looks like a typical Hollywood action movie, but not bad... Rain plays an assassin who was trained to be a killing machine since he was a kid; but ran away … END_OF_DOCUMENT_TOKEN_TO_BE_REPLACED 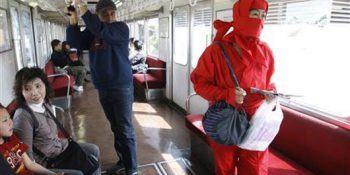 People who dressed in ninja costume can travel for free on the Iga railway line in Japan during the annual Iga Ueno Ninja Festival from April 1 to May 6. (Image from Reuters / Kim Kyung Hoon) Iga is a city 450 kilometres from Tokyo and famous for its history of … END_OF_DOCUMENT_TOKEN_TO_BE_REPLACED