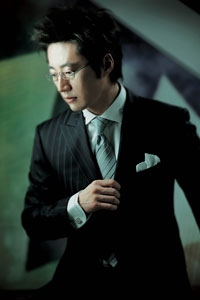 The Korean Television Drama Production Company Association made an unusual decision last Friday to ban actor Park Shin-yang from appearing in any dramas in the future, stating that his outrageous wage demand as the reason behind the sanction.

Park requested 170.5million won (~USD110k) per extended episode for popular drama War of Money, which the production complied to but failed to pay up in full. Park filed a lawsuit to claim his unpaid fees (~ 341mil won), which probably prompted the Friday meeting that led to the ban.

The association is also requesting TV stations to ban the involved production company for giving in to Park’s demand at the first place and thus “disrupting the orders” of drama production standards.

At the moment an A-list Korean star could demand 30-40mil won per episode, a few super A-listers could get 70-80mil, while the one and only Bae Yong-joon was paid 200mil won when filming The Legend. Bae’s case was unique though for the fact that foreign investors were heavily involved.

Korean drama production companies have been complaining a lot lately about the high wages. They were planning to set a cap on the actors’ wages last month, which I believe is already being implemented unofficially… as some of the big names are “voluntarily” reducing their wages recently.

Park Shin-yang is obviously a guinea pig for the association to show their determination in the wage battle. He has not done anything wrong legally, but there’s always hidden rules in every industry that needs to be followed, unfortunately… and he was at the wrong circumstances at the wrong time.

[Update September 2010] Park Shin-yang is making his comeback after almost two years of hiatus; seems like the ban is unofficially lifted.

Winners of the 44th (Korean) Baeksang Arts Awards, presented in Seoul on April 24.

This will be the final year of my 30's. Time flies, and it seems to fade faster as one gets older. This post is a bit of recap of my adult life and some future … END_OF_DOCUMENT_TOKEN_TO_BE_REPLACED

Trailer for American film Top Gun: Maverick, a sequel to 1986's Top Gun. Beautiful is not the usual word to associate with action movies, but I cannot find a better … END_OF_DOCUMENT_TOKEN_TO_BE_REPLACED

Malaysia will be in lockdown from March 18 to March 31, 2020, to deal with the Covid-19 situation. Officially it's a Movement Control Order (MCO) but it's … END_OF_DOCUMENT_TOKEN_TO_BE_REPLACED

Korean pop idol Sulli, former member of girl group f(x), was found dead at her home on Monday. Authorities are investigating the cause of death, and it's presumed … END_OF_DOCUMENT_TOKEN_TO_BE_REPLACED

Singapore has imposed the circuit breaker measures to curb the spread of Covid-19 since early April. They announced an extension (until June 1) and some new rules a … END_OF_DOCUMENT_TOKEN_TO_BE_REPLACED

A cute photo series amidst the Covid-19 lockdown in Malaysia. Armed forces are present to assist the police to enforce the Movement Control Order (MCO) across the … END_OF_DOCUMENT_TOKEN_TO_BE_REPLACED