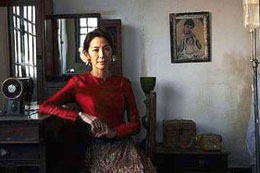 Malaysian actress Michelle Yeoh, who’s starring as Myanmar’s pro-democracy leader Aung San Suu Kyi in an upcoming Hollywood film, was deported from Myanmar on June 22 and is barred from entering the country indefinitely.

Officials in Myanmar didn’t explain why the actress is blacklisted, but it’s hard not to relate it with movie The Lady, which tells the story of Suu Kyi, a Nobel Peace Price laureate who was under house arrest by Myanmar’s military junta for almost 15 of the 21 years before her release in November 2010.

Despite being released, it seems that Suu Kyi’s freedom is still restricted in many ways. The Myanmar’s current military-backed government probably won’t want Michelle Yeoh to act as a spokesperson for Suu Kyi in the country.

The military authorities in Burma have released pro-democracy leader Aung San Suu Kyi earlier today. The 65-year-old Nobel Peace Prize winner (honoured in 1991) has been detained under house arrest for 15 years of the past 21 years.

Aung San Suu Kyi helped set up the National League for Democracy (NLD) party which won the 1990 general election despite her arrest a year earlier. But the military, which rules the Southeast Asian nation since 1962, refused to relinquish power.

A comparison of satellite images of Myanmar’s Hainggyi Island before and after Cyclone Nargis on May 2. The top image was taken in late 2004, while the bottom one on May 5, 2008. It’s total destruction.

The cyclone made landfall in Myanmar on May 2, sending a storm surge 40 kilometres up the densely populated Irrawaddy delta. It’s estimated that 60,000-100,000 people have lost their lives, and many still missing.

At least 1.5 million people are affected and required immediate aid. And sadly the country’s military government is blocking international help despite clearly incapable of handling the relieve efforts by themselves.

It’s only until two days ago, a week after the disaster, that they allowed food and medical supplies to pass the border. They are not allowing aid workers to go in though, which is creating other issues.

My friend who works with a Malaysian NGO said that many organisations have doubts over the locals’ ability to distribute to those in dire need. But I guess they have no choice but to hand over the supplies at the border to the military.

You can’t stop a natural disaster, but it’s a crime to deal with the aftermath like the Myanmar government. I hope this won’t turn into a human-made catastrophe.

This will be the final year of my 30's. Time flies, and it seems to fade faster as one gets older. This post is a bit of recap of my adult life and some future … END_OF_DOCUMENT_TOKEN_TO_BE_REPLACED

Been planning for a while to make Japan my next big trip destination. Seems like its not happening soon because of other commitments. And I want to avoid the … END_OF_DOCUMENT_TOKEN_TO_BE_REPLACED

Scanned picture of a 1998 cover of the Victoria's Secret swimwear catalogue. The models are Stephanie Seymour, Daniela Peštová and Tyra Banks - the first generation … END_OF_DOCUMENT_TOKEN_TO_BE_REPLACED

Trailer for American film Top Gun: Maverick, a sequel to 1986's Top Gun. Beautiful is not the usual word to associate with action movies, but I cannot find a better … END_OF_DOCUMENT_TOKEN_TO_BE_REPLACED

Singapore has imposed the circuit breaker measures to curb the spread of Covid-19 since early April. They announced an extension (until June 1) and some new rules a … END_OF_DOCUMENT_TOKEN_TO_BE_REPLACED

A cute photo series amidst the Covid-19 lockdown in Malaysia. Armed forces are present to assist the police to enforce the Movement Control Order (MCO) across the … END_OF_DOCUMENT_TOKEN_TO_BE_REPLACED

Malaysia will be in lockdown from March 18 to March 31, 2020, to deal with the Covid-19 situation. Officially it's a Movement Control Order (MCO) but it's … END_OF_DOCUMENT_TOKEN_TO_BE_REPLACED

Korean pop idol Sulli, former member of girl group f(x), was found dead at her home on Monday. Authorities are investigating the cause of death, and it's presumed … END_OF_DOCUMENT_TOKEN_TO_BE_REPLACED