It has been more than three weeks since the massive Sichuan earthquake.

The Chinese government has been doing well with the rescue and relief efforts, credits to that. And international community – including some of the blog readers here – have shown their love and support for the victims.

Sharing a few pictures by Xinhuanet, of the people catching back to their normal life. They might have lost their love ones and their homes, but life goes on. 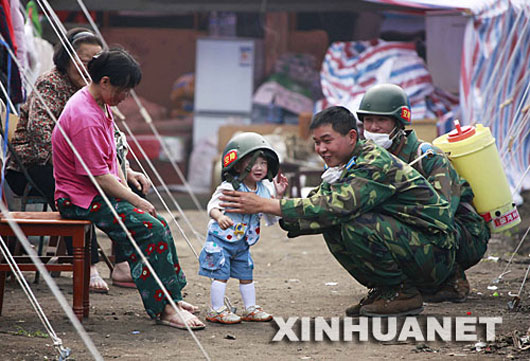 END_OF_DOCUMENT_TOKEN_TO_BE_REPLACED

American actress Sharon Stone wondered if the Sichuan Earthquake was karma when interviewed by the press at the Cannes Film Festival in France.

The Chinese video below, clipped from a Hong Kong news, also interviewed reporters from around the world about their thoughts on her statement.

A massive earthquake struck Sichuan, China, on May 12. The death toll is over 65,000 with many still missing. Millions of people are also left homeless.

And please don’t make this into a nationality issue. Stone does not represent all Americans, and I believe many of them have their hearts on Sichuan too.

Chinese bloggers are debating whether some natural phenomena were early signs of the massive earthquake that struck Sichuan, China, on May 12.

One of the most talk-about situations is the toad migration at various places across China. I shared one of the toad stories a few days before the quake. That one happened a few thousand kilometres away from the quake zone though.

The most peculiar one happened on May 10 in a village in Mianzhu, a county heavily damaged during the earthquake. Video below is a SCTV Chinese news reporting on the incident, two days before the earthquake…

An invited expert in the video said that it’s just a common situation, that the toads were simply looking for a better place to live (for food and breeding etc.)

Mass movement of wild animals were seen as a sign of pending disasters in ancient China, especially for earthquakes. The news above mentioned the concern of some villagers too, which unfortunately became a real nightmare.

Did the toads sense something coming? Was it merely coincidence and common situation like some scientists claimed? The speculation won’t end anytime soon… as many people believe in myths and conspiracies instead of science.

Back to the quake, the death toll has risen to 34,000 and it’s still counting. Again, help in whatever way you can… every bit counts.

The death toll is 11,921 at the time of writing (about 16 hours after the quake). The number is rising by the hour with many still missing. The worst hit area is Beichuan County, about 160 kilometres northeast of the quake epicentre in Wenchuan.

Chinese government dispatched 50,000 troops and armed police to help on the same day. Credit to the effort and hope the fast respond can save some lives.

Follow my Sichuan earthquake tag for updates on the relief efforts and other news.

This is the second large-scale natural disaster to hit Asia in May. Cyclone Nargis struck Myanmar earlier this month with many casualties as well.

This will be the final year of my 30's. Time flies, and it seems to fade faster as one gets older. This post is a bit of recap of my adult life and some future … END_OF_DOCUMENT_TOKEN_TO_BE_REPLACED

Trailer for American film Top Gun: Maverick, a sequel to 1986's Top Gun. Beautiful is not the usual word to associate with action movies, but I cannot find a better … END_OF_DOCUMENT_TOKEN_TO_BE_REPLACED

Malaysia will be in lockdown from March 18 to March 31, 2020, to deal with the Covid-19 situation. Officially it's a Movement Control Order (MCO) but it's … END_OF_DOCUMENT_TOKEN_TO_BE_REPLACED

Korean pop idol Sulli, former member of girl group f(x), was found dead at her home on Monday. Authorities are investigating the cause of death, and it's presumed … END_OF_DOCUMENT_TOKEN_TO_BE_REPLACED

Singapore has imposed the circuit breaker measures to curb the spread of Covid-19 since early April. They announced an extension (until June 1) and some new rules a … END_OF_DOCUMENT_TOKEN_TO_BE_REPLACED

A cute photo series amidst the Covid-19 lockdown in Malaysia. Armed forces are present to assist the police to enforce the Movement Control Order (MCO) across the … END_OF_DOCUMENT_TOKEN_TO_BE_REPLACED