Nano created huge buzz worldwide when it was unveiled in January 2008; the car is in hot demand in India where it’ll hit the roads in July 2009.

The demand for the car is so high that the company has to make a lucky draw to decide their first 100,000 customers for the first phase of deliveries. A dedicated assembly plant will be ready in 2010 with an annualised capacity of 350,000 cars.

There are reasons why Tata Nano is so cheap; but as it’s often stressed, the Nano’s main aim is to provide safe, affordable, four-wheel transportation to families… and we can’t argue that a car would be much safer than a bike.

Some environmentalists are not that fond of the car, as more cars = more pollution. Tata has responded to the issue that an electric version of Nano is in mind, which has sprung wide interest in western countries.

Btw, the car might lack certain comfortability features, but it’s not lacking in design… that’s one cute car that I don’t mind owning based on appearance alone.

India’s Tata Motors has unveiled the world’s cheapest car on January 10 in New Delhi. The vehicle, called the Tata Nano, will sell for 100,000 rupees (USD2,500)… 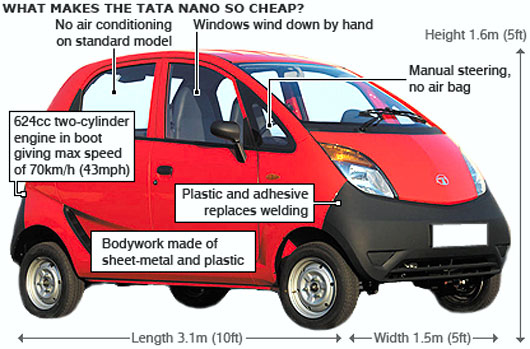 What makes Tata Nano so cheap? (Illustration via BBC)

Company chairman Ratan Tata said that Nano is “a safe, affordable and all weather transport; a people’s car designed to meet all safety standards and emissions laws and accessible to all.”

Some environmentalist, as expected, are concerned that the vehicle will lead to more air pollution from traffic congestions. Sounds true, but who are us to deny others the leisure to own their cars when we are driving one of our own? I bet that most of those environmental critics are car owners too.

This will be the final year of my 30's. Time flies, and it seems to fade faster as one gets older. This post is a bit of recap of my adult life and some future … END_OF_DOCUMENT_TOKEN_TO_BE_REPLACED

Trailer for American film Top Gun: Maverick, a sequel to 1986's Top Gun. Beautiful is not the usual word to associate with action movies, but I cannot find a better … END_OF_DOCUMENT_TOKEN_TO_BE_REPLACED

Malaysia will be in lockdown from March 18 to March 31, 2020, to deal with the Covid-19 situation. Officially it's a Movement Control Order (MCO) but it's … END_OF_DOCUMENT_TOKEN_TO_BE_REPLACED

Korean pop idol Sulli, former member of girl group f(x), was found dead at her home on Monday. Authorities are investigating the cause of death, and it's presumed … END_OF_DOCUMENT_TOKEN_TO_BE_REPLACED

Singapore has imposed the circuit breaker measures to curb the spread of Covid-19 since early April. They announced an extension (until June 1) and some new rules a … END_OF_DOCUMENT_TOKEN_TO_BE_REPLACED

A cute photo series amidst the Covid-19 lockdown in Malaysia. Armed forces are present to assist the police to enforce the Movement Control Order (MCO) across the … END_OF_DOCUMENT_TOKEN_TO_BE_REPLACED