A Buddhist temple in Thailand, is holding rituals for devotees to ‘die and reborn’.

Everyday hundreds of people would visit the Wat Prommanee temple in Nakhon Nayok, about 100km northeast of Bangkok, to participate in the ritual. The devotees would lie in coffins for a few minutes while the monks chant some prayers… and then rise from the coffins believing that they are cleansed of their past and ready for a new life [more on IHT]

The temple has been running the ceremony for more than three years, and its popularity seems to be ever growing with up to 700 visitors per day during weekends. The attendees would pay 100-180 bath (~ USD3-5) to partake in the ceremony.

The Amazing Race Asia (TARA) season 3 has premiered on AXN-Asia on September 11.

I know most of the regulars here are not watching this show (or not able to), thus I’m not going to bore you with the details… but will share some Asian cultures and places that are featured in the race instead.

The race started at the Rama 1 Monument in Bangkok… the first feature that came onto scene was the famous auto-rickshaws commonly known as ‘Tuk Tuk’ in Thailand.

Similar auto-rickshaws can also be found in other South Asian countries, but Thai’s Tuk Tuk is probably the most iconic version. Little known fact though, is that Tuk Tuk was originated from Japan and was brought into Thailand in late 1950s. Most of the Tuk Tuk these days are local made. 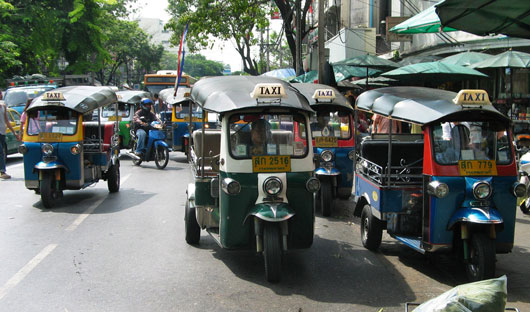 END_OF_DOCUMENT_TOKEN_TO_BE_REPLACED

Songkran, or the Thai New Year, is celebrated on April 13-15 every year. The celebration also coincides with the New Year of many other calendars in South and South East Asia, including the Tamils and Sikhs. 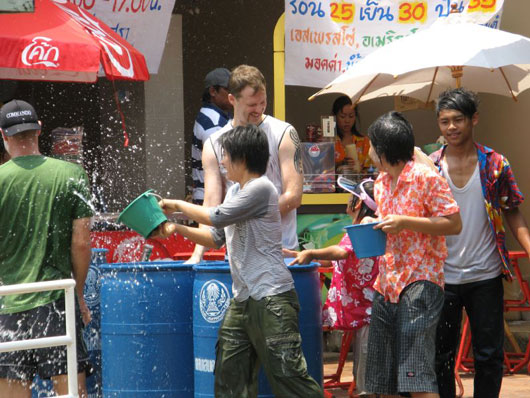 People having fun at Songkran Festival in Thailand (Image by jEdC)

Songkran is traditionally a time to pay respects to elders and to visit the temples. However, the tradition has been overshadowed in recent decades by the ‘throwing of water’ celebration with people roaming the streets with containers of water, water guns, or garden hose to drench each other and passers-by.

The throwing of water is originated as a way to pay respect to people by gently pouring a small amount of water on other people’s hands. It is also meant as a symbol of washing all of the bad things away from the previous year… but obviously it’s all about fun these days.

The water throwing has become a major tourist attraction in Thailand every year, with travellers from around the world joining the water splashing festival.

This will be the final year of my 30's. Time flies, and it seems to fade faster as one gets older. This post is a bit of recap of my adult life and some future … END_OF_DOCUMENT_TOKEN_TO_BE_REPLACED

Been planning for a while to make Japan my next big trip destination. Seems like its not happening soon because of other commitments. And I want to avoid the … END_OF_DOCUMENT_TOKEN_TO_BE_REPLACED

Scanned picture of a 1998 cover of the Victoria's Secret swimwear catalogue. The models are Stephanie Seymour, Daniela Peštová and Tyra Banks - the first generation … END_OF_DOCUMENT_TOKEN_TO_BE_REPLACED

Trailer for American film Top Gun: Maverick, a sequel to 1986's Top Gun. Beautiful is not the usual word to associate with action movies, but I cannot find a better … END_OF_DOCUMENT_TOKEN_TO_BE_REPLACED

Singapore has imposed the circuit breaker measures to curb the spread of Covid-19 since early April. They announced an extension (until June 1) and some new rules a … END_OF_DOCUMENT_TOKEN_TO_BE_REPLACED

A cute photo series amidst the Covid-19 lockdown in Malaysia. Armed forces are present to assist the police to enforce the Movement Control Order (MCO) across the … END_OF_DOCUMENT_TOKEN_TO_BE_REPLACED

Malaysia will be in lockdown from March 18 to March 31, 2020, to deal with the Covid-19 situation. Officially it's a Movement Control Order (MCO) but it's … END_OF_DOCUMENT_TOKEN_TO_BE_REPLACED

Korean pop idol Sulli, former member of girl group f(x), was found dead at her home on Monday. Authorities are investigating the cause of death, and it's presumed … END_OF_DOCUMENT_TOKEN_TO_BE_REPLACED