Chinese tennis star Li Na is featured on the cover of Time Magazine, which also named her as one of the 100 most influential people in the world. 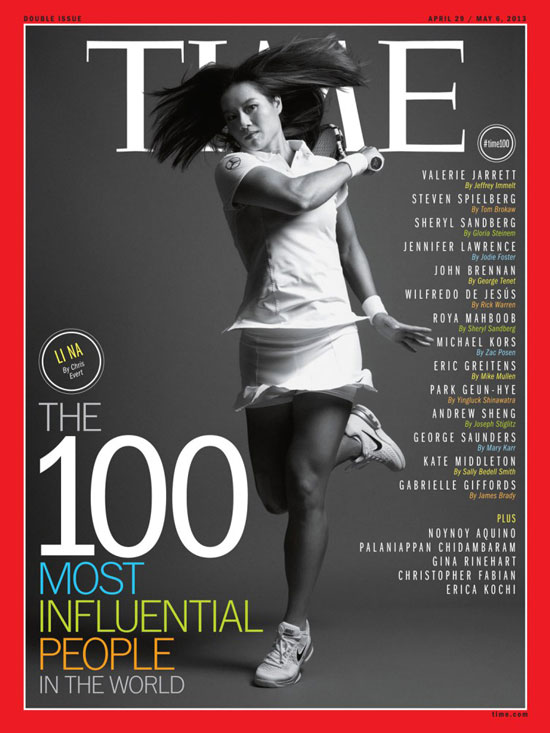 The 31-year-old Chinese player rose to prominence after winning the French Open in 2011, the first Asian to win a Grand Slam singles title. 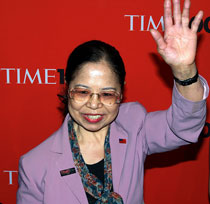 Among them there’s one who’s a bit special, she’s Madam Chen Shu-Chu, a vegetable vendor from Taiwan. Below is her intro on Time, written by famous director Ang Lee…

Chen Shu-chu is a seller of vegetables in a stall in Taitung County’s central market, in eastern Taiwan. Out of her modest living, Chen, 59, has managed to donate nearly NT$10 million (that’s $320,000) to various causes, including $32,000 for a children’s fund, $144,000 to help build a library at a school she attended and another $32,000 for the local orphanage, where she also gives financial support to three children.

What’s so wonderful about Chen’s achievement is not its extraordinariness but that it is so simple and matter of fact in its generosity. “Money serves its purpose only when it is used for those who need it,” she told a newspaper.

And rather than bask in her celebrity, Chen seems to dismiss the whole thing with a wave of her hand, perhaps even with a hint of irritation. “There isn’t much to talk about, because I did not enter any competition,” she says. “I haven’t really made any huge donations.”

She’s planning to establish a fund to help the poor with education, food and health care. Amazing, but of all she has given away, her greatest gift is her example. (Image by David Shankbone from the Time 100 dinner).

[Update] Chen is also named by Forbes Asia as one of the 48 heroes of Philanthropy, and by Reader’s Digest Asia as Asian of The Year in 2010.

END_OF_DOCUMENT_TOKEN_TO_BE_REPLACED

This will be the final year of my 30's. Time flies, and it seems to fade faster as one gets older. This post is a bit of recap of my adult life and some future … END_OF_DOCUMENT_TOKEN_TO_BE_REPLACED

Trailer for American film Top Gun: Maverick, a sequel to 1986's Top Gun. Beautiful is not the usual word to associate with action movies, but I cannot find a better … END_OF_DOCUMENT_TOKEN_TO_BE_REPLACED

Malaysia will be in lockdown from March 18 to March 31, 2020, to deal with the Covid-19 situation. Officially it's a Movement Control Order (MCO) but it's … END_OF_DOCUMENT_TOKEN_TO_BE_REPLACED

Korean pop idol Sulli, former member of girl group f(x), was found dead at her home on Monday. Authorities are investigating the cause of death, and it's presumed … END_OF_DOCUMENT_TOKEN_TO_BE_REPLACED

Singapore has imposed the circuit breaker measures to curb the spread of Covid-19 since early April. They announced an extension (until June 1) and some new rules a … END_OF_DOCUMENT_TOKEN_TO_BE_REPLACED

A cute photo series amidst the Covid-19 lockdown in Malaysia. Armed forces are present to assist the police to enforce the Movement Control Order (MCO) across the … END_OF_DOCUMENT_TOKEN_TO_BE_REPLACED