Fountains of Bellagio dancing to the music of Tiësto. Once in a lifetime, every time.

Video from the Can You Walk on Water? event at The Publika shopping gallery in Kuala Lumpur, Malaysia, last October. Learn more about non-newtonian fluid here. Event by Mach by Hong Leong Bank, concept by We are KIX.

The featured girl is Cay Kuijpers, model of Dutch-Filipino-Spanish descent.

Video of a beautiful musical fountain at the Lotte Department Store in Busan, South Korea. Background music (for most part) is Abracadabra by pop group B.E.G.

The “graphic water fall” is a creation of Aquatique Show International, a French company specialises in modern water features. Guinness has recorded this as the world’s tallest indoor music fountain.

Going to visit this if I ever go to Busan. The city is not a high priority in my travel list though.

The Dubai Fountain – the world’s largest choreographed fountain system – is set on the man-made Burj Khalifa Lake at the centre of Downtown Dubai. Bet it’s going to become a popular tourist attraction.

The designer is a Californian company also responsible for the fountains at the Bellagio Hotel Lake in Las Vegas. The Bellagio fountains were the largest of its kind until the completion of the Dubai Fountain.

Meanwhile, Christopher Tin is an Asian American composer. He released the Calling All Dawns album last month, and Baba Yetu is one of the 12 contemporary pieces. An old version of Baba Yetu is also a theme song for the Civilization video game back in 2005.

Baba Yetu means Our Father in Swahili, a language from East Africa. The lyrics are direct translations of the Lord’s Prayer, a famous Christian prayer. Not sure if the host (of the Dubai Fountain) realised about the fact; or perhaps the Muslim country is actually pretty liberal about religious stuff.

The Roman Baths in the City of Bath, England, is an old Roman public bathing site. The baths are no longer usable but the complex is now a museum and popular tourist attraction. Visited the place in 2005… 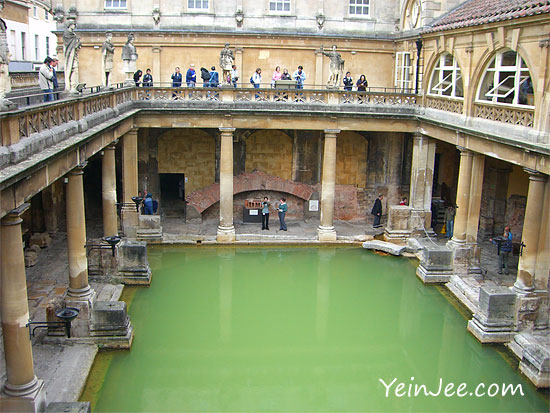 END_OF_DOCUMENT_TOKEN_TO_BE_REPLACED

A cool fountain-clock at the main railway station in Kanazawa, Japan. Contrary to most electronic or mechanical clocks in public areas, the fountain uses (computer programs and) little water jets to display its contexts instead. The words at the beginning of the video means Kanazawa Station.

Kanazawa is a city in north-western Ishikawa Prefecture. It’s famous for its traditional handicrafts, and it’s also a major tourist attraction among Japanese. The region is relatively unknown to foreigners though.

This will be the final year of my 30's. Time flies, and it seems to fade faster as one gets older. This post is a bit of recap of my adult life and some future … END_OF_DOCUMENT_TOKEN_TO_BE_REPLACED

Been planning for a while to make Japan my next big trip destination. Seems like its not happening soon because of other commitments. And I want to avoid the … END_OF_DOCUMENT_TOKEN_TO_BE_REPLACED

Scanned picture of a 1998 cover of the Victoria's Secret swimwear catalogue. The models are Stephanie Seymour, Daniela Peštová and Tyra Banks - the first generation … END_OF_DOCUMENT_TOKEN_TO_BE_REPLACED

Trailer for American film Top Gun: Maverick, a sequel to 1986's Top Gun. Beautiful is not the usual word to associate with action movies, but I cannot find a better … END_OF_DOCUMENT_TOKEN_TO_BE_REPLACED

Singapore has imposed the circuit breaker measures to curb the spread of Covid-19 since early April. They announced an extension (until June 1) and some new rules a … END_OF_DOCUMENT_TOKEN_TO_BE_REPLACED

A cute photo series amidst the Covid-19 lockdown in Malaysia. Armed forces are present to assist the police to enforce the Movement Control Order (MCO) across the … END_OF_DOCUMENT_TOKEN_TO_BE_REPLACED

Malaysia will be in lockdown from March 18 to March 31, 2020, to deal with the Covid-19 situation. Officially it's a Movement Control Order (MCO) but it's … END_OF_DOCUMENT_TOKEN_TO_BE_REPLACED

Korean pop idol Sulli, former member of girl group f(x), was found dead at her home on Monday. Authorities are investigating the cause of death, and it's presumed … END_OF_DOCUMENT_TOKEN_TO_BE_REPLACED