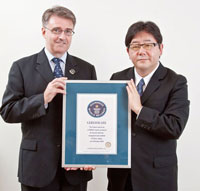 Japanese pop group AKB48 has been recognised by the Guinness World Records as the pop group with most number of members in the world. The 48-members group was created by Yasushi Akimoto in 2005 and is now the most popular girl group in Japan, with hit songs … END_OF_DOCUMENT_TOKEN_TO_BE_REPLACED

Japanese music video - a short movie to be precise - for Sakura no Hanabiratachi (桜の花びらたち, lit. Petals of Cherry Tree) by girl group AKB48, a 2008 remake of their debut single from 2006. The song expresses the nostalgia of high school graduation which usually … END_OF_DOCUMENT_TOKEN_TO_BE_REPLACED