A total of 918 saxophone players performed simultaneously at the Taichung City Plaza in the city of Taichung, Taiwan, on October 18 in a bid to break the world record for the largest saxophone ensemble.

The attempt was held in conjunction with the 6th annual Taichung Jazz Festival. The oldest saxophonists involved was 72 of age, while the youngest just three; Taichung deputy mayor Hsiao Jia Qi also took part in the event. 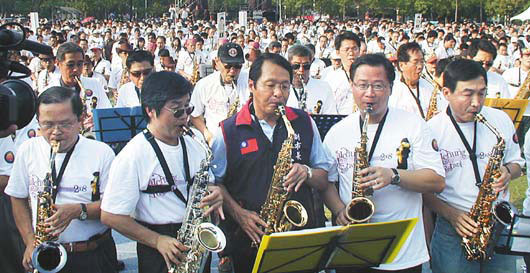 918 saxophonists in their new world record attempt (Image from Udn)

The current world record for the largest saxophone ensemble was set by Toronto in 2004 with 900 players.