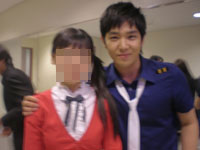 The reason for the suicide of 17-year-old Lee Eun-ji has caused outrage in South Korea. It’s alleged that the girl ended her life following harassments from pop group Super Junior’s fans who were unhappy after a picture of her posing with the boyband member, KangIn, was circulated online.

Lee appeared on a TV show which covered her story of losing 40kg in three months; and she took a photo with KangIn who was one of the guests. Lee’s blog was flocked with malicious messages since, and some fans gone to the extend of finding out her phone number and left abusive messages. A few fans have expressed regrets over their act since Lee’s death, but it’s a little too late.

While it’s undeniable that the fans abuse played a major part in her suicide, there’s perhaps other factors too… e.g. losing weight drastically is rarely a good thing to begin with; it’s unhealthy and could lead to depression. And there’s also the society value which overemphasised on looking slim/good etc.

Regardless, suicide is never the answer to anything. Rest in peace.

This will be the final year of my 30's. Time flies, and it seems to fade faster as one gets older. This post is a bit of recap of my adult life and some future … END_OF_DOCUMENT_TOKEN_TO_BE_REPLACED

Trailer for American film Top Gun: Maverick, a sequel to 1986's Top Gun. Beautiful is not the usual word to associate with action movies, but I cannot find a better … END_OF_DOCUMENT_TOKEN_TO_BE_REPLACED

Malaysia will be in lockdown from March 18 to March 31, 2020, to deal with the Covid-19 situation. Officially it's a Movement Control Order (MCO) but it's … END_OF_DOCUMENT_TOKEN_TO_BE_REPLACED

Korean pop idol Sulli, former member of girl group f(x), was found dead at her home on Monday. Authorities are investigating the cause of death, and it's presumed … END_OF_DOCUMENT_TOKEN_TO_BE_REPLACED

Singapore has imposed the circuit breaker measures to curb the spread of Covid-19 since early April. They announced an extension (until June 1) and some new rules a … END_OF_DOCUMENT_TOKEN_TO_BE_REPLACED

A cute photo series amidst the Covid-19 lockdown in Malaysia. Armed forces are present to assist the police to enforce the Movement Control Order (MCO) across the … END_OF_DOCUMENT_TOKEN_TO_BE_REPLACED