The third season of The Amazing Race Asia (TARA) is set to premier on September 11 on AXN-Asia. The franchisee of the popular US reality TV show is growing in popularity across Asia since making its debut in late 2006 and is back for good. 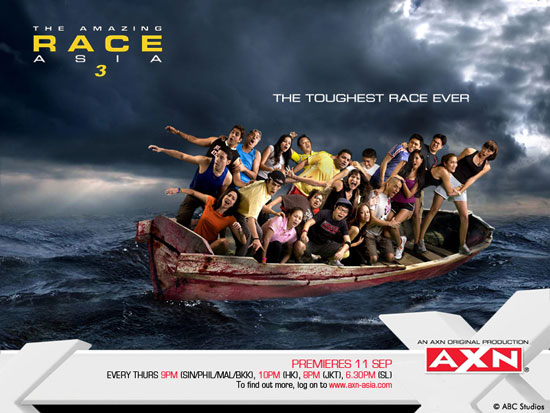 Hardcore Amazing Race fans might not like the Asian version for the overusing of celebrity participants to boost ratings, as some fans felt that reality shows are meant for ‘real’ people and not the celebs.

Regardless, the strategy seems to work well for AXN. The likes of Thai actress Paula Taylor and Pinoy model Marc Nelson have gained vast interest for the previous race… thus it’s not surprising to see that TARA-3 is loaded with celebs’ participants yet again.

The fun part about The Amazing Race Asia is the variety of participants from different nations. The 2008 teams are from Hong Kong, India, Malaysia, Philippines, Singapore, South Korea (debut) and Thailand; whereas the Indonesian, Japanese and Australian teams are missing in action this season. Allan Wu again the host.