“The Chaser” (추격자; Chugyeogja) is a Korean movie which won multiple awards at the Daejong Film Festival in 2008. I watched the movie shortly after the film fest, and I think their wins are quite justified… it’s simply a great movie. 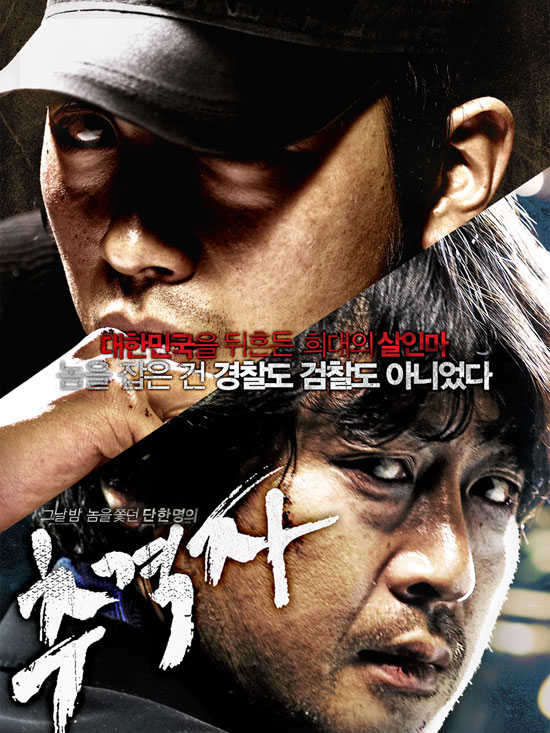 The Chaser is directed by Na Hong-jin and starred Kim Yoon-suk, Ha Jung-woo and Seo Yeong-hee etc. The movie is said to be based on a real serial killer, Yoo Young-chul, who murdered 20 person in 2003/2004. While the background of the story seems similar, the storyline itself is pretty much independent from the real incident…

The story revolves an ex-cop turn pimp who tries to save a friend/employee from a serial killer while time is running out.

Jung-ho (Kim Yoon-suk) is a pimp who was hunting for his disappearing girls, which he thought to be stolen/hired by other syndicates. He sent Mi-jin (Seo Yeong-hee) to trap a customer which he thought is working against him, because his last two girls have been missing since serving this guy.

Jung-ho however lost contact with Mi-jin after the customer brought her into a house; and it’s soon revealed that the customer is a serial killer (Ha Jung-woo)…

I will leave the rest as it is to avoid spoilers. The plot is quite different than most other suspense movies, as the killer is revealed pretty early… but yet, the movie is full of twists and surprises. Suspense is not the only selling point though, it’s a bit horrifying, a bit provocative, a bit sad, a bit warmth and overall a nice film.

The only downside I can think of is that the movie is a bit long… a full two hours. It could be better if they cut off a few scenes, just to make the movie more compact. Regardless, it’s a great movie worth recommending.

It’s reported that Warner Bros has acquired the remake rights, with Leornado DiCaprio in mind to play one of the lead roles (would love to see him playing the killer). If they can make it at least as decent at the originals, it’s almost guaranteed to be a big hit next summer.

This will be the final year of my 30's. Time flies, and it seems to fade faster as one gets older. This post is a bit of recap of my adult life and some future … END_OF_DOCUMENT_TOKEN_TO_BE_REPLACED

Trailer for American film Top Gun: Maverick, a sequel to 1986's Top Gun. Beautiful is not the usual word to associate with action movies, but I cannot find a better … END_OF_DOCUMENT_TOKEN_TO_BE_REPLACED

Malaysia will be in lockdown from March 18 to March 31, 2020, to deal with the Covid-19 situation. Officially it's a Movement Control Order (MCO) but it's … END_OF_DOCUMENT_TOKEN_TO_BE_REPLACED

Korean pop idol Sulli, former member of girl group f(x), was found dead at her home on Monday. Authorities are investigating the cause of death, and it's presumed … END_OF_DOCUMENT_TOKEN_TO_BE_REPLACED

Singapore has imposed the circuit breaker measures to curb the spread of Covid-19 since early April. They announced an extension (until June 1) and some new rules a … END_OF_DOCUMENT_TOKEN_TO_BE_REPLACED

A cute photo series amidst the Covid-19 lockdown in Malaysia. Armed forces are present to assist the police to enforce the Movement Control Order (MCO) across the … END_OF_DOCUMENT_TOKEN_TO_BE_REPLACED