The Large Hadron Collider (LHC), the world’s largest and highest-energy particle accelerator complex, has started its first test on September 10, 2008.

The LHC was built by the European Organization for Nuclear Research (CERN) and lies underneath the Franco-Swiss border near Geneva, Switzerland. It is funded by and built in collaboration with more than 8000 physicists from over 85 countries as well as hundreds of universities and laboratories. 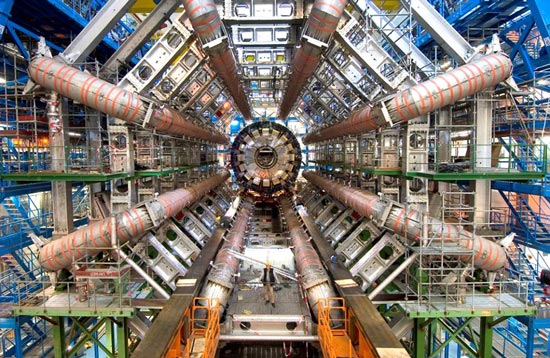 The LHC is one of the most controversial scientific projects in recent times. LHC is meant to create conditions similar to the “Big Bang” that started the universe. If the experiments are successful, it could create breakthroughs to the world of physics and provides in-depth information about our universe.

On more fantasy terms… the high energy particles will be travelling at close to light speed, a condition which could create wormholes and might allow time travelling according to some hypothesis.

The project is not all welcomed though; some scientist dubbed the project as the Doomday Test, fearing that it could cause the end of the world by creating uncontrollable blackholes.

And some others are criticising that the money (estimated cost €3.2–6.4 billion) could be better spent on more pressing matters like global warming and poverty etc.

You can check out more about LHC on its official website (forget about it if you don’t have a degree in science/engineering lol) or some simpler facts on Wikipedia; or just watch the introductory video below made by Chris Mann from CERN…

This will be the final year of my 30's. Time flies, and it seems to fade faster as one gets older. This post is a bit of recap of my adult life and some future … END_OF_DOCUMENT_TOKEN_TO_BE_REPLACED

Trailer for American film Top Gun: Maverick, a sequel to 1986's Top Gun. Beautiful is not the usual word to associate with action movies, but I cannot find a better … END_OF_DOCUMENT_TOKEN_TO_BE_REPLACED

Malaysia will be in lockdown from March 18 to March 31, 2020, to deal with the Covid-19 situation. Officially it's a Movement Control Order (MCO) but it's … END_OF_DOCUMENT_TOKEN_TO_BE_REPLACED

Korean pop idol Sulli, former member of girl group f(x), was found dead at her home on Monday. Authorities are investigating the cause of death, and it's presumed … END_OF_DOCUMENT_TOKEN_TO_BE_REPLACED

Singapore has imposed the circuit breaker measures to curb the spread of Covid-19 since early April. They announced an extension (until June 1) and some new rules a … END_OF_DOCUMENT_TOKEN_TO_BE_REPLACED

A cute photo series amidst the Covid-19 lockdown in Malaysia. Armed forces are present to assist the police to enforce the Movement Control Order (MCO) across the … END_OF_DOCUMENT_TOKEN_TO_BE_REPLACED