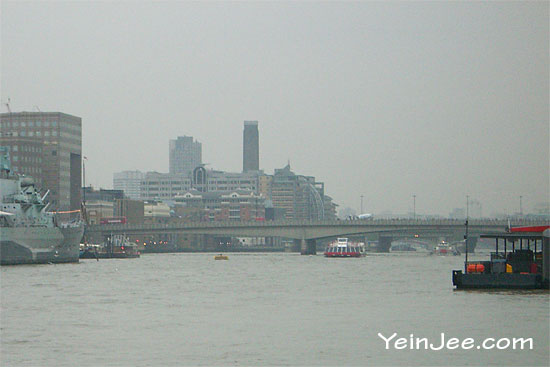 London Bridge has a very long history though; the first (wooden) bridge across the Thames was built by the Romans on the present site around 52 AD.

The original bridge was replaced with new timber bridge multiple times before a stone bridge was built in the 12th century. The construction of the bridge started in 1176, and completed with the gates, chapel, shops and houses in 1209.

The stone bridge stood for over 600 years despite numerous structural damage; it was finally replaced by another London Bridge in 1831. The new bridge didn’t last long though as structural problem again arouse since early 1900s.

The bridge was dismantled and replaced section-by-section with a new concrete structure in 1967; the dismantled parts were sold to the McCulloch Oil Corporation and transported to Arizona to be rebuilt at Lake Havasu City.

The current London Bridge was opened in 1973.

London Bridge is Falling Down

One of the world’s most well-known nursery rhyme; the fair lady refers to Queen Eleanor who was appointed to repair the collapsing London Bridge in 1270s. She misused the funds, which led to a major collapse in 1281.