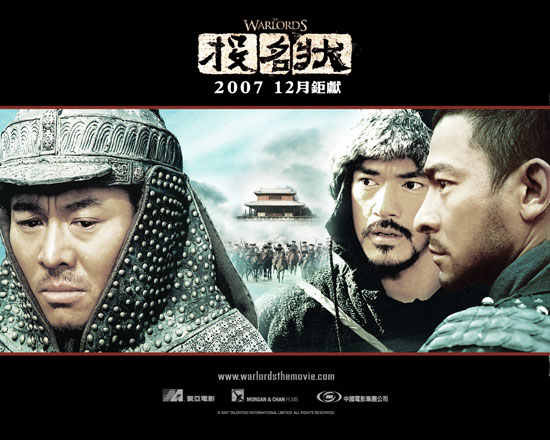 The movie is set on the later stage of Taiping Rebellion (1850-1871) in China’s Qing Dynasty. The rebellion was one of the largest civil war that humankind has witnessed, with an estimation of 20-30 million death.

The story is about the brotherhood of three sworn brothers, who could risk their lives for each other but yet were forced to turn against each other under harsh circumstances.

Qing Yun (Jet Li) was an army general who survived a battle which his entire troop was slaughtered. He was wandering aimlessly and later collapsed of exhaustion (and injuries), and was saved by a mysterious girl (Xu Jinglei).

Both of them parted soon, and QY encountered a bandit Wu Yang (Takeshi), who then led him to meet his bandit leader Er Hu (Andy Lau). The bandits were planning a raid on a military convoy for foods and goods, and QY impressed the men with his battle skills.

QY then followed WY and EH back to their village, and met with the mysterious girl again… whom was introduced as Mi Lan, EH’s wife. Both QY and ML pretended to be not knowing each other, but some special feelings were obviously developed between them.

The Qing army retaliated soon and attacked on their village, got back the stolen supplies and caused humiliation to the villagers, which led to suggestion from QY for the villagers to join the army so that their life could change better.

EH and WY although reluctant at first, but accepted the idea knowing that they didn’t have much choices. As a gesture of trust, the three men sworn into brotherhood vowing to protect each other with their blood, and to kill anyone that go against them.

QY led the group to join the Qing army and achieved remarkable victory which raised the eyebrows of some government leaders. Fearing his growing power and influence, those leaders decided not to aide QY during his battle against the rebel army.

In the camp, QY and his army were facing hunger and hardship without the backup from other troops… and the brotherhood was also in challenge by indifference of ideology, military discipline and morality. The situation was further complicated by the affair between QY and ML…

The Warlords is a good movie, probably not great, but really good. The storyline is quite straightforward, but it’s also thought invoking when it moves towards the end of the movie.

The movie balanced well between commercialism and good contents… the battle scenes were quite intriguing, and the main cast showed great chemistry between them.

Jet Li finally got the chance to shine not just because of his martial arts, but for his acting as well. There might be some sympathy votes for his winning at the HK Film Awards, but he deserved it nonetheless.

This will be the final year of my 30's. Time flies, and it seems to fade faster as one gets older. This post is a bit of recap of my adult life and some future … END_OF_DOCUMENT_TOKEN_TO_BE_REPLACED

Trailer for American film Top Gun: Maverick, a sequel to 1986's Top Gun. Beautiful is not the usual word to associate with action movies, but I cannot find a better … END_OF_DOCUMENT_TOKEN_TO_BE_REPLACED

Malaysia will be in lockdown from March 18 to March 31, 2020, to deal with the Covid-19 situation. Officially it's a Movement Control Order (MCO) but it's … END_OF_DOCUMENT_TOKEN_TO_BE_REPLACED

Korean pop idol Sulli, former member of girl group f(x), was found dead at her home on Monday. Authorities are investigating the cause of death, and it's presumed … END_OF_DOCUMENT_TOKEN_TO_BE_REPLACED

Singapore has imposed the circuit breaker measures to curb the spread of Covid-19 since early April. They announced an extension (until June 1) and some new rules a … END_OF_DOCUMENT_TOKEN_TO_BE_REPLACED

A cute photo series amidst the Covid-19 lockdown in Malaysia. Armed forces are present to assist the police to enforce the Movement Control Order (MCO) across the … END_OF_DOCUMENT_TOKEN_TO_BE_REPLACED