The Zimbabwean Central Bank has introduced a new Z$500,000,000 bank note on May 15 in a bid to tackle cash shortages because of the rampant inflation.

That’s half-a-billion Zimbabwean dollars bank note, which sadly converts to only about USD2… being a billionaire in Zimbabwe means nothing much at all. 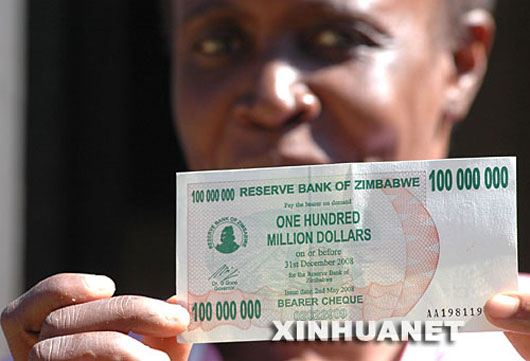 Zimbabwe is facing hyperinflation since 2004, with their annual inflation rate skyrocketing to 165,000% in February 2008… by far the highest in the world (2nd placed Iraq has an estimated inflation of 60%).

You can read more about the history of the Zimbabwean dollars via Wikipedia, but be prepared to be bombarded by all the extravagant numbers.

More related posts
Who wants to be a millionaire?
Going on a millionaire’s trip
100 trillion Zimbabwean dollar note