Was checking some info on Dragonball (the movie) as it was originally scheduled to release this summer; didn’t realise that it was postponed to April 2009 instead. 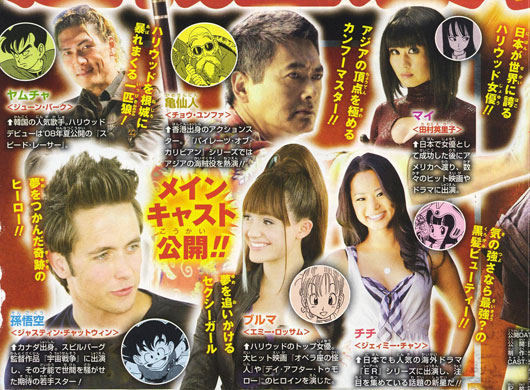 The movie created some hype when it was announced last year that Hong Kong star Stephen Chow, a renowned DB fan, would be working with Twentieth Century Fox to produce a live action adaptation of the popular Japanese anime/manga.

The initial buzz was not all positive though, as lots of the Dragon Ball fans are worried that the movie would spoil the original work. Judging from some recent developments, it seems that their worry are not entirely baseless.

I won’t say that I am a huge fan of Dragon Ball, but it was one of the first Japanese manga series that I read, and I do like it. Hope the movie – starring Justin Chatwin, James Marsters, Jamie Chung, Emmy Rossum, Chow Yun Fat, Joon Park and Eriko Tamura etc. – will at least be watch-able.