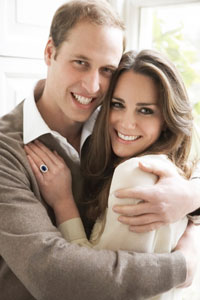 Tens of thousands of people – probably including my sister who happens to be around – have gathered on the main streets of London to celebrate the royal wedding of Prince William and Kate Middleton, which is to be held at the Westminster Abbey on Friday.

Prince William, the eldest son of the beloved late Princess Diana, began dating Kate in 2003. The couple announced their engagement in November last year, and here comes the big day.

Set aside unforeseeable circumstances, this royal couple is going to be crowned the King and Queen of the United Kingdom someday.

It’s estimated that over a billion people will be watching the live/delayed broadcast. My mum is already glued in front of the TV set, which is a bit uncharacteristic of her. I think I might have to prepare the dinner tonight… some fish & chips perhaps?