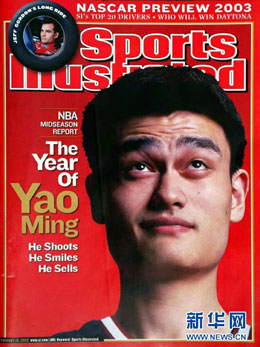 Chinese basketball star Yao Ming is expected to announce his retirement from NBA (and most probably from basketball altogether) on July 20.

Rumours are that the 30-year-old has told the US National Basketball Association (NBA) about the plan due to persistent injuries. His agent has refused to confirm (nor deny) the news though, stating that everything will be announced by the player himself on the mentioned date.

The 2.29m (7ft 6in) Houston Rocket centre was the first pick of the 2002 NBA draft. He has been plagued by injuries for the past few years, primarily on his left foot/leg. He barely played in the past two seasons, so it won’t be surprising if he’s indeed retiring. He averaged 19.0 points and 9.2 rebounds in 486 NBA games during his career.

It’s debatable how good a player Yao is (or was?), but he’s no doubt one of the world’s most iconic sportsmen ever. He puts China on the global map, and in turn popularises basketball in the world’s most populated country too.

[Update] Yao has officially announced his retirement from professional basketball as expected. Best wishes to his future endeavour.