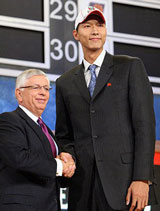 Chinese basketball star Yi Jianlian was selected with the 6th pick in the 2007 NBA draft by the Milwaukee Bucks.

Yi is 6ft 11in. He previously played for Guangdong Southern Tigers in the Chinese Basketball Association and has played with the Chinese national team in the 2004 Olympic Games and 2006 World Championships.

Yi is surprised with Milwaukee’s decision to pick him, as he has previously expressed his desire to play in a city with heavy Asian influence. Milwaukee, with an estimated 27,500 Asian-American population, certainly doesn’t fit the bill.

The Chinese international however remains positive with his NBA future. “It’s a surprise to me… I’m not really familiar with the city as well, but I’m happy to be playing with the team and happy to play in the NBA.”