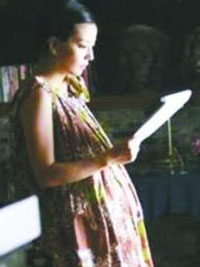 This photo looks suspicious though. I’m guessing that it was from some film shooting instead of real life; she’s probably holding a script there.

Zhao has never responded officially to the rumours, but there’s the fact that she has not made any public appearance since late 2009, even missing out on the promo events for movie 14 Blades which premiered last month.

There’s also another rumour that she is indeed married but unfortunately dumped in just months… in which her manager has responded as absolutely ridiculous.

[April update] It’s said that Zhao has given birth; more on Stareastasia.